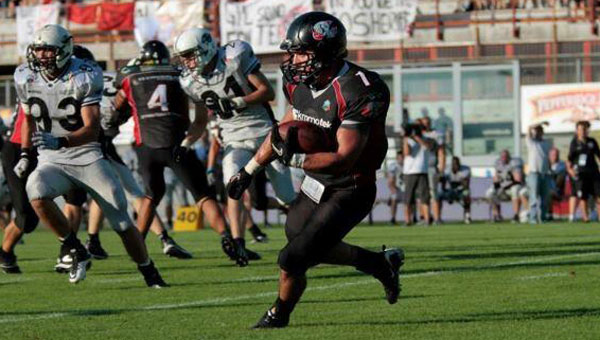 Former Pelham High School football standout Wes Holland wanted to continue his playing career after wrapping up his collegiate career at the University of North Alabama in the fall of 2011, but he didn’t have many options.

After workouts ahead of the National Football League Draft in April and tryouts with Canadian Football League teams didn’t bear any fruit, Holland decided to pursue a career in Europe.

Holland created a profile at Europlayers.com, a website created for American players with an interest in playing for teams overseas, and spent $9 a month to keep it updated. When the Sicily, Italy based Catania Elephants lost American running back Nate Kmic to an anterior cruciate ligament injury, team officials went online and contacted Holland after seeing his profile on the website.

Holland made the most in just a half season with the Elephants, who are allowed only three American players on their roster each season, helping his team to the IFL Super Bowl. Despite a 61-43 loss to the Parma Panthers, Holland shined for Catania in the national championship game July 7, which included his 96-yard kickoff return for a touchdown in the longest kickoff return in the 32-year history of the IFL Super Bowl.

The transition from the American gridiron to the Italian playing field was an easy one for Holland, who began his college career at the Naval Academy, but the adjustment off the field took some time.

“It’s a beautiful place, but the culture is a little different,” Holland said. “They’re very carefree and relaxed. The people are very warm and accommodating, especially in Sicily. The traffic in Italy is really different from the United States. The Italian members of the team finding time to practice with their full-time jobs was very challenging. The team was like a brotherhood to me.”

Holland did find one aspect of the Italian culture he liked the most.

“The food is wonderful,” Holland said.

Holland said he hopes to follow a similar path this fall if a NFL or CFL team needs a mid-season replacement due to injury. Holland, the older brother of current Auburn University linebacker Jake Holland, hopes a few professional general managers and coaches in North America were paying attention to the Italian league this summer.

“That’s part of what I came over here for,” Holland said. “I don’t want to wish it on anybody, but if somebody gets hurt, hopefully I’ll get a call.”

Holland, who finished with his career at UNA with 1,429 rushing yards and 11 rushing touchdowns in three seasons with the Lions, said he has a backup plan to continue his playing career if he doesn’t get any interest from NFL and CFL teams this fall.