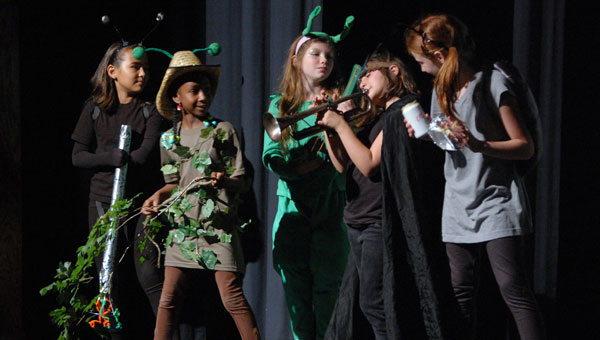 MONTEVALLO – The Parnell Memorial Library Theater was full of children wearing pipe-cleaner antennae and wings as they prepared for the sixth annual Children’s Summer Theatre Workshop.

“The story follows the changing seasons in a meadow where the bees and flowers, the bugs, the birds and the ants live together,” McEntee said.

The 24 children, ages 6 to 10, auditioned in May and were given roles and scripts before starting two weeks of rehearsals in July. The final performance was July 20.

“I really hope that this workshop is a very positive experience for the children,” McEntee said. “Together, they sing and dance to live music, memorize scripts and imagine themselves to be characters in another world. They must coordinate their efforts for the show to succeed. They have all worked very hard.”

The Parnell Memorial Library Foundation provided funding for the musical.

“It furthers our mission in promoting the arts and serving the community,” said Libbie Rodgers, treasurer of the foundation.

Rodgers said the kids had no direction for their costumes, which allowed the families to create their variations on costumes for bees, flowers, insects and other characters. The Montevallo Main Street Players donated plain flats for the teenage helpers to paint as a backdrop.

Fourth grader Holly Ferguson, who played a grasshopper, said participating in the musical is “really fun.”

“I love it because I get to do a rap,” she said, smiling.

Jenny Wheeler, whose daughter plays an ant, became the production’s drama and dance coach, as well as set coordinator for the teen helpers.

“It’s a blast. There’s nothing in the world like teaching children theater that they could love all their life,” she said. “You can be 80 years old and be involved in community theater.”