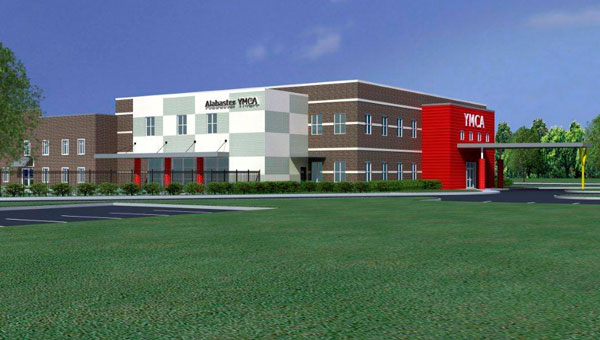 Alabaster's DAY Program will move into the second floor of the Alabaster YMCA's new addition, which is scheduled to be completed in early 2013. (contributed)

Alabaster’s DAY Program for at-risk youth will have room to add about 50 percent more students in the next several months, as the program is preparing to move into the second floor of the Alabaster YMCA’s new addition.

The Alabaster YMCA in 2010 moved most of its programs from a small building near the former Siluria mill site to the former Body Shop gym building on Plaza Circle.

Currently, crews are working to build an 18,000-square-foot addition to the former gym building. The addition is scheduled to be completed in late January 2013.

When complete, the new addition will house the Alabaster YMCA’s child care programs on the first floor, and will house the DAY Program on the second floor.

During a recent meeting, the Shelby County Commission voted to donate $200,000 to help construct the second floor of the new addition to house the DAY Program, which currently is in a building near the Alabaster Senior Center on the old Siluria mill site.

In addition to the commission’s donation, the construction project also will benefit from a $200,000 donation from the Shelby County Board of Education and $450,000 in capital funds provided by the DAY Program.

“It’s a great program, because some of the kids come from some tough situations,” said YMCA District Vice President Lane Vines.

Vines said the YMCA decided to share its new space because the YMCA and the DAY Program have many similarities.

“We are both non-profits, we are both United Way funded, we both work with children. It was a perfect match,” Vines said.

The new facility will allow the DAY Program to grow from serving about 60 students to about 90 students, said Shelby County Manager Alex Dudchock.

The most important experience of my high school career

By KATIE McDOWELL / Lifestyles Editor Ten years have passed since I graduated from high school. I’ve given that anniversary... read more