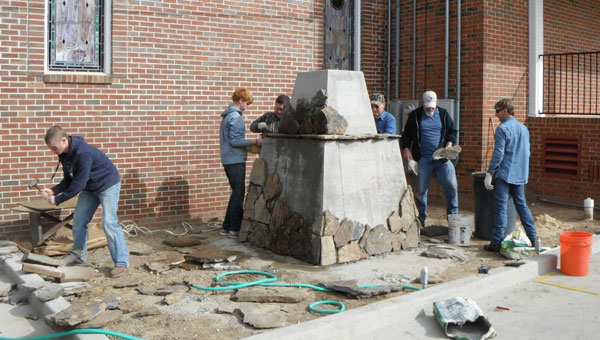 MONTEVALLO – When Dogwood Grove Baptist Church in Montevallo underwent renovations about five years ago, the church’s steeple was removed along with its bell. Stephen Pettigrew decided to build a new home for the bell as his Eagle Scout project. The bell now resides in a stone pillar outside the more than 150-year-old church.

The Frisco Railroad Company donated the bell to the church in August 1953.

Kingwood Christian School 10th grader Pettigrew said he looked at other projects around the church, but this “stuck out the most.”

Pettigrew joined Cub Scouts as a first grader, and is now a part of Troop 367, which meets at Riverchase United Methodist Church. After a church member poured concrete for the bell tower’s base, Pettigrew and his troop found stones in a creek in Bluff Park. Pettigrew decided to attach the stones to the concrete base. 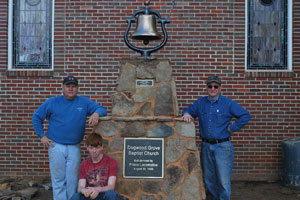 Pettigrew, his troop and church members finished the project in May. He said all of the volunteers contributed about 119 hours combined.

“I’m proud of him and of what he’s accomplished,” said Pettigrew’s father, Calvin Pettigrew. “He was involved in sports, school, piano and church, and was being run ragged. We asked him what he wants to do.”

Pettigrew chose Boy Scouts, and set a goal to become an Eagle Scout before he got his driver’s license. At 15, Pettigrew now has his learner’s permit and has accomplished his goal.