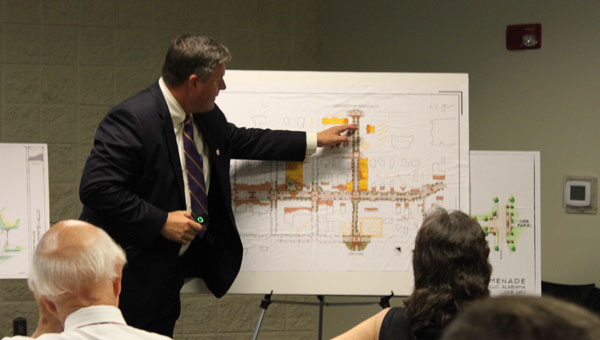 MONTEVALLO – County Manager Alex Dudchock painted a picture of a bright future for Montevallo during the July 25 Montevallo Chamber of Commerce meeting.

With the city of Montevallo, the University of Montevallo and Shelby County partnering to revitalize Montevallo’s downtown, there have been no reservations with the partnership thus far, Dudchock said.

Dudchock said any funding the County Commission approves for the projects comes from lodging tax, not sales or ad valorem taxes.

The University of Montevallo employs 530 full-time employees and 225 student workers during the last 12-month period. Dudchock said the university has pledged to grow the full-time students by 500, from 2,246 to 2,746 in the next five years.

Dudchock said the university and county are looking into a potential lodging project at Jeter Hall with potential conference capabilities.

“We’re excited about it because it’s unconventional,” Dudchock said of the changes. “We’re going to be here for awhile.”

The Lovelady Building and Operations, adjacent to Bank Trust, was purchased by the University of Montevallo and Shelby County. Dudchock said UM would make an announcement about the space at a later date.

Additionally, the two-story building on the corner of North Boundary Street and Main Street will be torn down for public parking spaces. Dudchock said plans for the former bus depot, most recently Steve O’s, are undecided currently.

Dudchock said he hopes future generations won’t notice where the university begins and the town ends.

“We’re blending who we are, what we are and it’s our community,” Dudchock said. “It’s refreshing.”