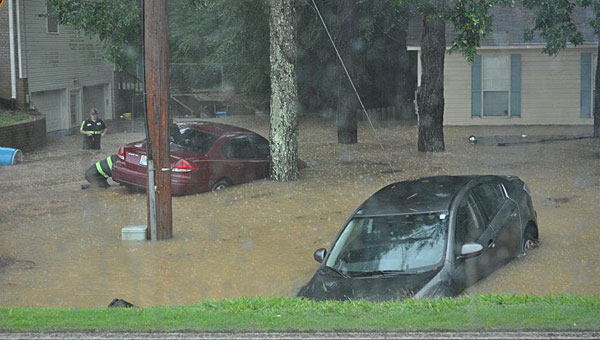 Crews work to pull cars from a flooded area along Thompson Road on July 18. Parts of the city were under several feet of water as more than 5 inches of rain fell in a few hours. (Contributed/Alabaster Police Department)

According to NWS data, Alabaster received more than 5 inches of rainfall in a little more than two hours during the morning storm. Because Alabaster, like much of Alabama, has been facing drought conditions recently, the dry ground did not effectively soak up the rain, said NWS Meteorologist Kevin Laws.

“When you are in a drought and you get a lot of rain, the ground is almost like concrete. It will not soak up the rain,” Laws said. “That just exacerbates the problem.”

Laws also said urban areas such as Alabaster are more prone to flooding because of the dense development in the area.

“There’s no ground for the water to run into,” Laws said. “Flooding is dependant on a lot of things.”

Alabaster Deputy Police Chief Curtis Rigney said the severe flooding seemed to strike Alabaster worse than other area cities, but said the department received no injury reports in the storm.

“We pulled up the weather radar, and it seemed to just be hanging over Alabaster,” Rigney said. “After speaking with the engineer, no city’s infrastructure is designed to handle 5 inches of rain in two hours.”

Several Alabaster houses and other buildings in Alabaster suffered water damage in the flood, particularly in the areas surrounding Buck Creek and along Thompson Road.

Water rose around the Alabaster Church of God on First Avenue West, and most of the areas around the Buck Creek Trail were under several feet of water.

Alabaster City Administrator George Henry said the city had to replace a retaining wall at Warrior Park “that completely washed out,” and had to dry out a portion of the Albert L. Scott Public library. July 18 marked the second time the library flooded in a little more than a week.

Rains also dumped multiple feet of water into the training and locker rooms in the basement of Thompson High School, also marking the second time the facility flooded in a little more than a week. School officials previously said the repairs to the school will be covered under insurance.