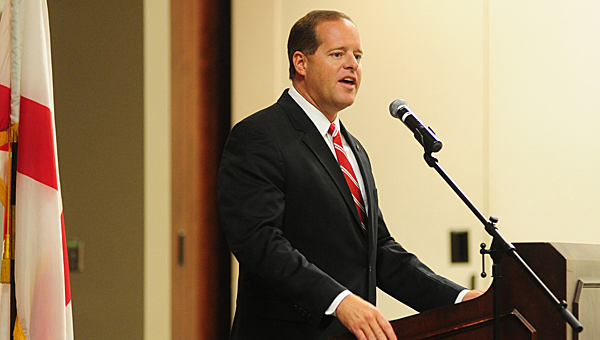 State Sen. Cam Ward, R-Alabaster, said he is in support of a Sept. 18 vote to allow the state to use money from the Alabama Trust Fund to support the state’s shrinking general fund budget.

Ward’s comments came during a July 25 Greater Shelby Chamber of Commerce meeting, during which he shared his thoughts on the issue.

Through the referendum, voters will be able to decide whether or not to allow the state to take money out of the Trust Fund for the next three years to prop up the general fund budget, which includes funding for government departments such as Medicaid and the prison system.

Ward said the recession has caused the general fund budget to shrink by about $1 million per year over the past several years, and said government departments could face “12 to 13 percent sweeping cuts” if the vote fails.

“I am in favor of that (referendum), and here’s why. The money we would take out to support the general fund would total 2 percent of our savings account,” Ward said. “This referendum is critical. It’s not perfect, it’s not ideal, but it’s a tipping point for us.”

Ward said the state prison system and Medicaid programs could face heavy funding cuts if the motion is voted down, and said he has sponsored legislation in the past in an attempt to cut down on Alabama’s prison population.

He said he would like to see the state invest more heavily in drug courts, community corrections and other programs aimed at keeping some non-violent offenders from entering the prison system.

“We need to punish criminals, but let’s be smart about it,” Ward said.

Alabama could be facing “350,000 or 450,000 new enrollees” in its Medicaid program over the next few years through the federal health care act, Ward said.

“We can’t afford to run it the way it is now. If the September 18 vote fails, Medicaid will take the brunt of the hit,” Ward said. “No matter how noble an idea it is, we can’t afford it.”

Ward also said voters will be able to vote on Sept. 18 on whether or not to rewrite business and banking articles in the Alabama Constitution, and said the Legislature’s Constitutional Reform Committee is working gradually to “rewrite every article” in the Constitution over the next several years.

“We’ve got to cut down on the size of our Constitution,” Ward said.