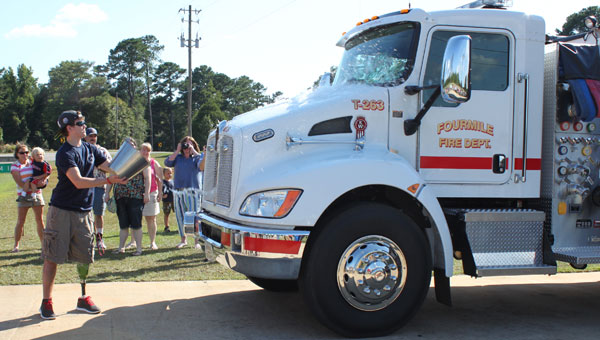 FOURMILE – Chris Goodwin was all smiles as he christened Fourmile Volunteer Fire and Rescue Department’s new tanker truck July 28 at the fire station.

Forming an old-fashioned bucket brigade, firefighters and community members alike passed a silver bucket full of water down the line to Goodwin, who doused the truck’s white hood.

“Neighbors helping neighbors” was emblazoned on the front of the truck, and Fire Chief John Entrekin said it was the department’s adopted motto.

“We value the mutual aid relationship we have, and we need each other,” Entrekin said.

Entrekin said the department needed to use that relationship when Goodwin, a Shelby County High School graduate, was in a single-car accident Feb. 29. Due to that accident, the department put extrication equipment on its priority list, as the firefighters needed the equipment to free Goodwin from his truck.

“Chris is an inspiration to me personally and all of the firefighters here,” Entrekin said. “It was bad accident not far from here, and I’m glad he’s here today.”

The department unveiled its new extrication equipment at the truck dedication. Goodwin donned firefighting equipment and joined the firefighters as they tested the equipment.

“He has got a really powerful testimony about what God is doing in his life. I want to honor him today and just tell him how much we appreciate him,” he added.

Goodwin, who lost part of his left leg in his accident, was named an honorary firefighter at the station.

“I’m very grateful for them and everything they’ve done,” Goodwin said.

Fourmile’s new truck cost $253,513, and was mostly funded by a Federal Emergency Management Agency grant. The department and community raised more than $24,000 to fund the remainder of the truck.

According to Entrekin, the new truck, Tanker 263, holds 2,000 gallons of water and is designed to take water to areas without a fire hydrant to provide adequate water supply.

As a community event and fundraiser for the department, Fourmile holds a pancake breakfast on the first Saturday of the month. Attendees pay $5 for breakfast from 7-10 a.m.