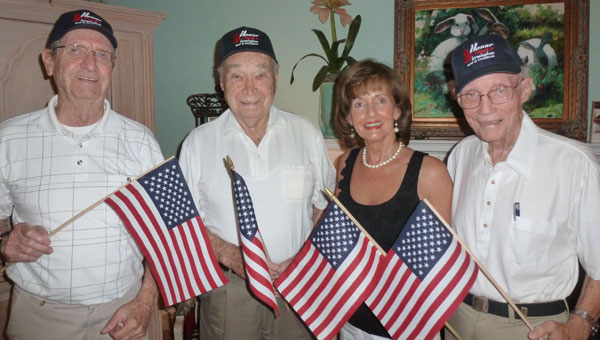 Joe McCormick, Buck Falkner, Jack Bradley and Janice Falkner have strong ties that bind. Janice is McCormick’s daughter and was married to Falkner’s son, the late Jeff Falkner. Bradley’s wife, Marie, is Falkner’s sister, and Aunt Marie is especially close to Janice. The families live close together in Columbiana.

The men served in World War II. McCormick was an Army Air Force flight engineer where he served in the Pacific and earned a purple heart after his B-29 crashed into the ocean where only five of the 11 crew survived. Falkner was a crew chief who served in England repairing B-24, 25 and 26s.

Bradley was an Army staff sergeant who landed in Naples, Italy, and fought the Germans in the “Purple Heart Valley.”

The three veterans, along with Janice, shared another binding experience when they went on Birmingham’s last Honor Flight to Washington D.C.

The flight included 88 veterans, 66 WWII and 22 from Korean and Vietnam Wars. There have been 15 Honor Flights since 2007, taking 995 veterans for free to the memorial.

Each veteran is accompanied by a guardian who pays for his or her own travel and takes care of any needs the vet may have. Janice was her father’s guardian and the others had volunteers.

The day began early. Breakfast was served on the flight to Baltimore where water hoses saluted the airplane after it landed.

In the airport the vets were greeted by a long line of active Navy in dress whites who shook each vet’s hand.

“It was the welcome home that we did not get after World War II,” said McCormick.

On the bus ride to the memorials, box lunches were served. Wheelchairs, water and more military greeted the Honor Flight at the WWII, Imo Jima, Korean and Vietnam Memorials in 100-plus heat.

More than 500 people welcomed the group home at the airport with cheers.

“It was a fantastic day,” said Falkner. “It was wonderful to have so many people appreciate us.”