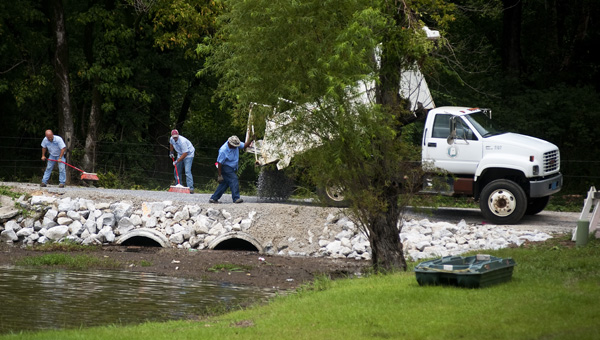 Crews work to repair a section of Indian Lake Lane after heavy rain washed away part of the road. (Reporter Photo/Jon Goering)

The Shelby County Highway Department has closed a section of Indian Lake Lane off Shelby County 261 after early morning flooding in the area washed away a portion of the road.

However, residents living on Indian Lake Circle and Indian Lake Lane north of its intersection with Indian Lake Drive must temporarily use a gravel service road being constructed behind Riverchase Middle School to access their properties.

“It is unknown how long this area will be closed,” read a Pelham Police Department release.

The road damage came during early morning flash flooding along Shelby County 261 in Pelham and Helena. Shortly before noon on July 31, the National Weather Service reported some portions of central Alabama had reported as much as 8 inches of rainfall since midnight.