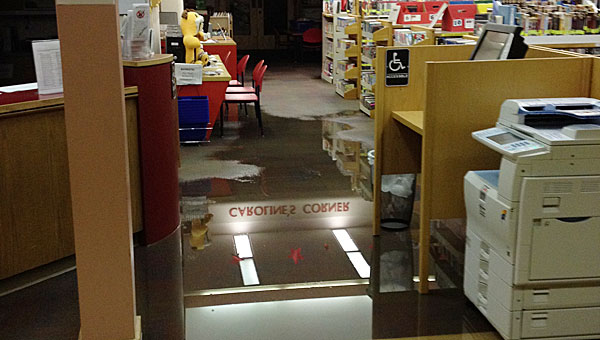 Flood waters rise around the main desk at Alabaster's Albert L. Scott Public Library during heavy rains on July 31. The library has flooded three times in the past month. (Contributed)

Parts of Alabaster, Helena and Pelham reported flooding early July 31 after the National Weather Service predicted more than 4 inches of rain had fallen since midnight.

The Pelham Fire Department reported flooding along Shelby County 261, particularly in the Saddle Run and Stratford Place neighborhoods on the northern side of the road, said Pelham Fire Battalion Chief David McCurry.

McCurry said waters rose quickly during the night, but said there were “very few” homes and structures damaged by flooding.

“We’ve been fighting it since 2:30 this morning,” McCurry said.

The outdoor swimming pool at the Pelham YMCA branch on U.S. 31 also rapidly took on water and overtopped, causing minor flooding to the organization’s adjoining facility.

“We are used to dealing with that during extremely heavy rainfall,” said YMCA District Vice President Lane Vines. “There’s some silt that we will have to clean out of the pool, and a little bit of water got into the building.”

Vines said the YMCA suffered no significant damage, and said the branch was scheduled to open a little later than normal.

Water rose several feet on Buck Creek in Helena and flooded parts of Shelby County 261, and firefighters responded to an early morning blaze in the Cahaba Falls neighborhood off Shelby County 52.

Part of Cahaba Valley Road closed due to flooding