Police talk man down from overpass 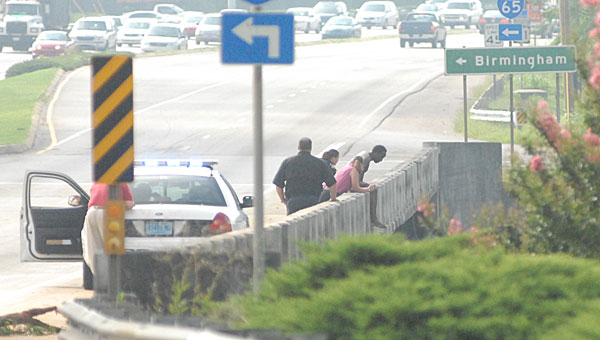 Police officers and negotiators talk with a man threatening to jump off the U.S. 31 bridge over Interstate 65 in Alabaster on Aug. 1. Police were able to talk the man down, and no injuries were reported in the incident. (Reporter Photo/Neal Wagner)

No injuries were reported after police talked down a man threatening to jump off the U.S. 31 bridge over Interstate 65 in Alabaster on Aug. 1.

The incident began when the Alabaster Police Department received “several 911 calls” reporting a man threatening to jump off the bridge at about 8:15 a.m., said Alabaster Police Chief Stanley Oliver.

“When we arrived, we determined he had a potential to actually jump,” Oliver said.

Police then temporarily shut down all lanes of I-65 between exit 238 in Alabaster and exit 242 in Pelham, and closed U.S. 31 near the scene of the incident.

All lanes were reopened to traffic at about 9:30 a.m.

After Alabaster and Pelham police officers, Alabaster firefighters, Shelby County Sheriff’s Department deputies and Alabama State Troopers responded to the scene, a police negotiator was able to talk the man, who was sitting on the railing of the overpass, down.

Officers then placed the middle-aged man in protective custody and transported him to UAB Hospital in Birmingham.

Police have not released the man’s name, but Oliver said the man told officers he grew up in Alabaster.

“I’m glad it turned out the way it did,” Oliver said.

FROM STAFF REPORTS Conner Godsey, who will play collegiate golf at the University of Montevallo this fall, continued his terrific... read more