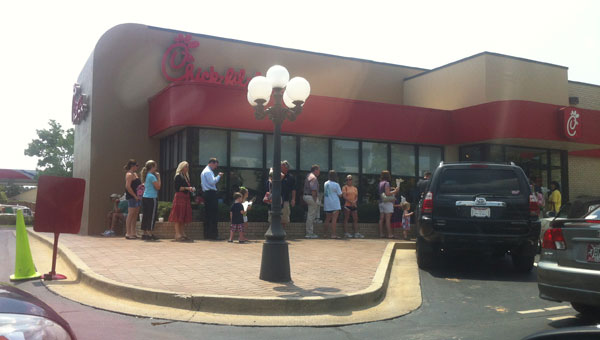 Caption: Patrons line up outside the Chick-Fil-A in Inverness around lunchtime Aug. 1. (Reporter photo/Nicole Loggins)

Police officers said they have been dealing with “significant” traffic problems at Chick-fil-A restaurants across the county on Aug. 1 during a nationwide customer-organized support day for the restaurant chain.

“We’ve still got a few guys out there now,” Lott said at about 1:45 p.m., noting the crowd at the restaurant was creating traffic problems along Alabama 119.

Lott said Chick-fil-A hired two off-duty Pelham officers to help direct traffic at the restaurant throughout the remainder of the day.

“They’ve seen a significant increase in customer traffic today,” Lott said. “It was busy during lunch, and I’m sure it will pick up again later this evening.”

Some said they chose to support Chick-fil-A because the chain’s CEO shares their moral beliefs.

On Facebook, DonDee Osburn said she and her children went to lunch at the Alabaster location to participate in the support day.

“Made me happy to see people putting money into supporting a business that stands up for the Bible,” she wrote.

Others noted that they waited in line for at least 30 minutes.

At about 11:30 a.m., traffic leading into the Alabaster restaurant stretched to U.S. 31, and had caused congestion on many of the Colonial Promenade’s roads. Parking lots surrounding the restaurant also were quickly filling up.

At the chain’s Inverness location, a line of waiting customers outside nearly encircled the building at about noon. Cars were parked on the grassy median in front of the restaurant.

Amy Jones contributed to this report.

Police talk man down from overpass

Police officers and negotiators talk with a man threatening to jump off the U.S. 31 bridge over Interstate 65 in... read more