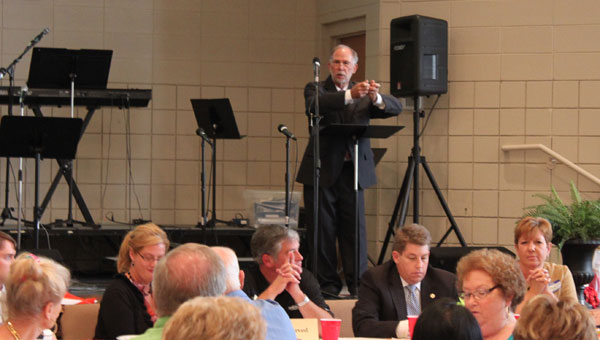 COLUMBIANA – More than six years ago, State Rep. Jim McClendon introduced a bill to ban texting while driving. On Aug. 1, McClendon saw the bill come to fruition, and he shared his reaction at the South Shelby Chamber luncheon Aug. 2.

“You would think it would be a no-brainer,” he said of the bill. “The crash and fatality rate is the same as drunk driving, and the number one group affected by this are our young people.”

McClendon, R-Springville, said the first offense costs $25, the second $50 and the third costs $75.

“Just put the thing down,” he said of drivers’ cell phones.

“That’s the same as being blindfolded and driving at 55 miles per hour down a football field,” she said.

One of these projects includes outfitting law enforcement and traffic safety entities, as well as founding the “Click it or ticket” campaign and the Yellow Dot Program.

ADECA also provides grants and funding for recreation and conservation programs, as well as housing the state’s surplus division. Byard described the surplus division as the “state of Alabama’s attic,” as it holds anything from podiums and computers to boats and fire trucks. The state holds public auctions, the next of which is Aug. 29 in Montgomery, for non-profits, towns and cities to bid on equipment.

“Find what you can find that is of value to you,” Byard said. “You can search for things a city or county could need after a disaster.”

FROM STAFF REPORTS  The Helena Business Association will host a “meet the candidate” forum on Aug. 12 to allow Helena... read more