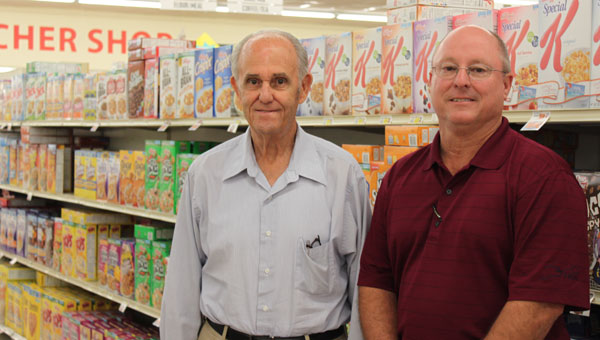 Sammy McEwen built the Wilsonville grocery store in 1961 and recently sold it to Gary Huddleston, as McEwen plans on opening an antique business. (Reporter photo/Christine Boatwright)

WILSONVILLE – Sammy McEwen and Gary Huddleston were both raised in the grocery store business.

McEwen first joined the grocery business as a 14-year-old, and it is the only career he has known other than two years in the U.S. Navy in the mid-1940s.

McEwen opened his first store in 1946, and later built McEwen Fresh Market in the heart of Wilsonville in 1961.

“God’s been good to me,” McEwen said. “I started out with nothing.”

At 85, McEwen recently decided to sell his grocery store to Huddleston and start a new venture in antiques.

“I knew this family,” McEwen said. “I didn’t have to sell the store, but I found a good man.”

McEwen said he has known the Huddleston family, including Gary Huddleston’s father and brother, for more than 30 years.

“I’d been after him to sell for years,” Huddleston said, laughing.

McEwen said he has “dabbled” with antiques through the years and enjoys buying and selling. He doesn’t have an opening date set currently, but plans to have the store named Country Peddlers in the property adjacent to the grocery store.

Huddleston has run another grocery store in West Blocton for about 11 years, which his oldest son is running while Huddleston gets the newly named Hudd’s Food Center in order.

“I grew up in the grocery business,” Huddleston said. “With my oldest son, I’m trying to give him a little more responsibility. One day, it’ll be his, and my other son’s too. It’s how my dad started me and my brother off.”

Huddleston’s family shared a warehouse with McEwen, which is where the relationship began.

Huddleston said the next closest grocery store is at least nine miles from Wilsonville.

“We can give them good-quality meat and produce at competitive prices,” he said. “Customers have been very nice and very supportive, and I’ve really appreciated that.”