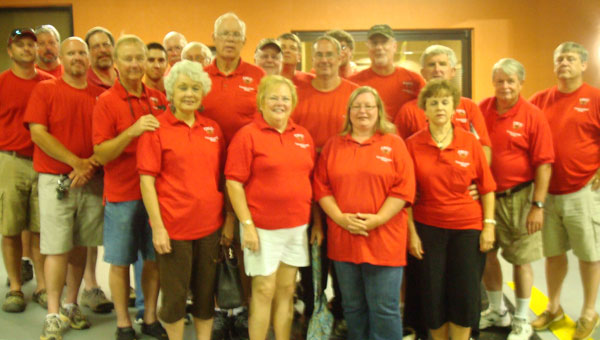 Robert Denney moved to Columbiana in 1962 with his new job at the telephone company. He needed a place to stay and rented a room with Mrs. Lexie Tinney, a widow in town. Tinney thought Denney was a fine young man and suggested he meet her pretty niece who was graduating from Shelby County High School. Denney’s fate was sealed as love bloomed. Robert Denney married Mary Gene Edmondson on March 26, 1965.

Mary Gene grew up in the First Baptist Church of Columbiana, the daughter of Gene and Adell Edmondson. Her mother is the oldest member of the church today at age 97. Robert joined the church and the Denney’s have been active members since.

Thirty years ago, Denney, along with Mike Jones, Eddie Lary and others, began using their hands as God led them and formed the church’s construction team. Denney has coordinated the team for years to help build whatever God needs, where He leads.

Whether it is a parsonage, church, homeless shelter or tornado ravished home, these workers for God have used their hands building for God in Texas, Oklahoma, Arkansas, Missouri, Indiana, Tennessee, Kentucky, West Virginia, North and South Carolina, Mississippi, Louisiana, Georgia, Florida and Alabama.

“We have never come upon a job that could not be done,” said Denney. “We always seem to have the right number of people at the right time. We do not go on vacation but go to work.”

For the last 20 years the church has worked in conjunction with the Ridgecrest Baptist Church after Lary moved to Tuscaloosa.

For the last two years, the team has worked on homes destroyed by tornados. The team works fast and efficiently. When they left Cullman this year, the house was roofed; the windows and doors were in; and one part sided. The whole house would have been sided if enough material had been available; a common problem for the team that works so fast.

There is an appointed time for everything. The second week in June is the time to build for the construction team of the First Baptist Church of Columbiana.