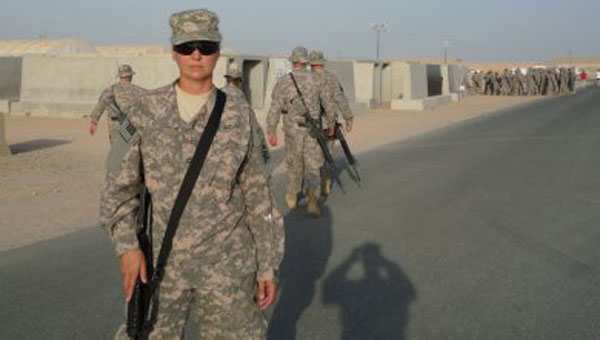 April Destafino was deployed to both Iraq and Afghanistan during the two years she served in the military. (contributed)

April Destafino grew up in a military family, she said. Her grandfather was a World War II vet and her Uncle Ray, a Vietnam 173rd vet. Then there was her Uncle Mark and her Uncle Ervin, who was killed in World War II and about whom a song, The Ballad of Ervin O. Jone, was written and performed by Nashville singer/songwriter Craig Gleason.

April said she has always wanted to join the military like her family members.

Instead, she said, she found herself “married” to the military following her “ex and his dreams and his goals.” But in 2006, at age 34, she decided it was time she joined.

“I am in the Alabama National Guard and have been deployed twice,” said Destafino.

In Iraq in 2008 and 2009, as human resource specialist with the 128th Medical out of Ashland, she was mail clerk, and in charge of the newsletter and other “multitask work.”

Then, in 2010-2011 she deployed to Afghanistan with 900th Maintenance doing convoy security, after working awhile in operations. She helped with daily operations, making sure all soldiers and equipment were accounted for. “I also was a driver, gunner, assistant convoy commander, truck commander and HNT interviewer,” the soldier said.

Interviewing by email, I asked about her family. “I have three children, Coral, 21, Christine, 14, and Christian, 10,” she told me. “Also, I have a grandson on the way.

“My parents are Phillip and Sonya Destafino. My parents and family support me and are proud and glad that I am home safe.”

She entered the Warriors Transition Unit in August 2011, beginning her transition back into civilian life Aug. 4, she said.

Destafino recently became an independent Mary Kay consultant, and is excited about the possibility of using this to help military personnel.

“I got addicted to the skin care products that were sent to us overseas,” she said. “I have great and wonderful plans that will benefit many more soldiers.

“The military is dear to me. The sacrifice is great but must be done. I love all my (military) brothers and sisters, and I salute you.”