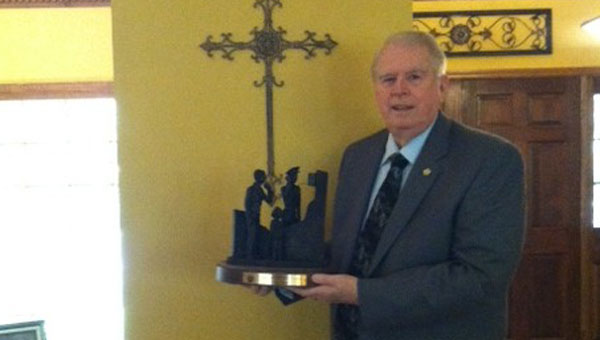 Chief Chaplain Mac Stinson was the recipient of the John A. Price Excellence in Chaplaincy award. (Contributed)

The chief chaplain of the Shelby County Sheriff’s Office Chaplain’s Association recently was recognized for his excellent service.

Stinson was the recipient of the John A. Price Excellence in Chaplaincy award. This award is the highest honor awarded annually by the 2,500-member organization, which serves 20 nations.

“This was an international award, one of only two given in a year, and it is for excellence in chaplaincy,” Shelby County Sheriff Chris Curry said. “Since 1994, all of the ordained ministers of many religions that have participated in our program are due credit for the accomplishments.”

Stinson began serving as a law enforcement chaplain in 1996 with Shelby County. There are more than 20 chaplains now serving with the Shelby County Sheriff’s Office.

“Mac has been the leadership for many, many years, and under him the service to citizens has flourished,” Curry said. “Many lives have been touched and surrounded by spiritual support and strength.

“Our agency and all of the employees have also been the benefactors of the chaplains’ support,” he added, “and we are so pleased that the reputation of the Shelby County Sheriff’s Office has been spread around the world with Mac Stinson as our example of excellence.”

Chaplains help law enforcement personnel with job-related issues such as post-traumatic stress, marriage and family problems, and are frequently called out to assist law enforcement with death notifications, suicides, fatal traffic collisions, death of children and other difficult situations.