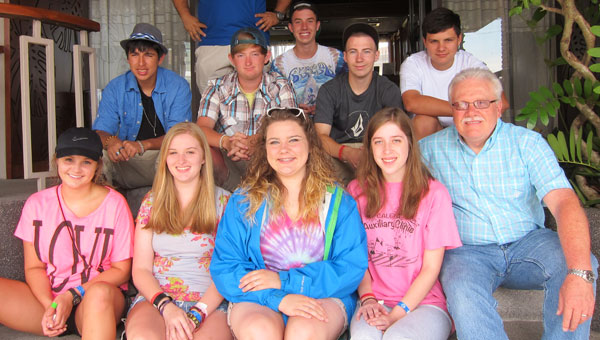 CALERA – Calera High School Spanish teacher Bruce Cooper decided to take education out of the classroom when he took his students to Costa Rica. June 10-19.

Cooper has taken other Spanish classes to Spain and Costa Rica in the past, but after six years at CHS, this is the first Calera group he has taken out of the country.

“It was not an educational trip per se,” Cooper said. “I wanted the students to have a feel of the culture and language.”

Senior Annie Gill said she quickly adapted to the language.

“It was pretty easy to get used to. By the second day, I felt like we’d been there about a week,” She said. “We got to see things we don’t normally get to see.”

“It was interesting how their money is so different,” he said. “I thought it would take a lot to get used to it, but it was easier than ours.”

Cooper said the students noticed most how the food differed from American fare. He said they ate rice and beans with a fruit drink at most meals.

“We stopped in the Houston airport on the way back, and they made a beeline to McDonald’s for a hamburger and fries,” Cooper said, laughing.

In Cooper’s classroom, he emphasizes the language, but also discusses culture and politics.

“I think now they have a much better understanding as they have somewhat experienced a situation they can relate to,” Cooper said. “Part of the problem in teaching a foreign language is getting them over the fear of speaking.”

Cooper said students who wouldn’t speak in class began to attempt the language in Costa Rica.

“The only way you can learn a language is practice and trying,” he said.

Cooper purchased a journal for each student so they would remember their experience. Senior Lisabeth Barton said she enjoyed the traveling aspect.

“My favorite part was traveling and seeing places and how people in Costa Rica live,” she said.

By CHRISTINE BOATWRIGHT / Staff Writer CALERA – Young musicians in Calera have new leadership in their schools as Ryan... read more