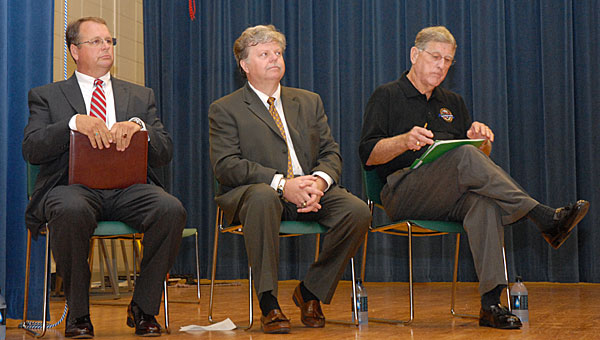 Three of Helena’s mayoral candidates shared their plans to attract new businesses to the city while working to improve the city’s offerings during an Aug. 7 forum at Helena Middle School.

During the forum, which was sponsored by the Greater Shelby Chamber of Commerce and the Shelby County Reporter, incumbent Mayor Sonny Penhale and candidates Greg Eddins and Mark Hall answered several questions posed by GSCC President Kirk Mancer.

Eddins, the owner of Helena Landscape Supply, said he would like to see Helena create a five-year plan “encompassing all the things that are priorities to us,” such as economic development, supporting the city’s schools and recreational offerings.

“We need to seek a successful model city that has a strip like our Old Town,” Eddins said. “In four years, we should be well on our way to being the city we should be already. We don’t want to go the same direction we are going now.”

Hall, the former Helena police chief, said he would work to improve the city’s parks and recreation offerings, and said he would like to see the city work to ensure its services and infrastructure can handle future growth.

He said he would help seat an economic development board “that is not afraid to go after businesses,” and said he would like to work to bring office buildings to Helena “to keep people here during the day.”

“If we are going in a new direction, I am the clear choice,” Hall said.

Penhale, who has been the Helena mayor for more than 40 years, said he would work to “continue the road Helena is on now,” and said he planned to retire from office if elected for another four years.

Penhale said he would continue to work to fill the city’s vacant storefronts, and said “the most enjoyable part of my life is trying to help people.”

“I will continue to dedicate my life to working for you,” Penhale told the crowd of about 75 gathered in the HMS auditorium.