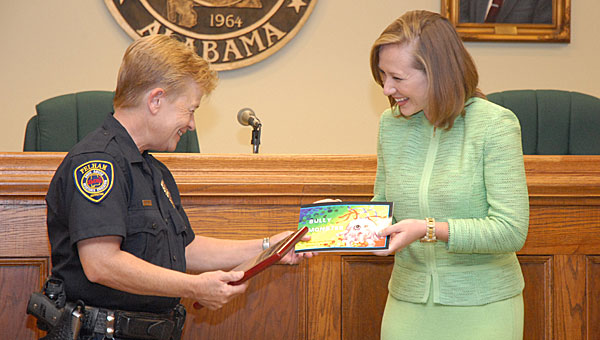 The founder of an Auburn-based anti-bullying organization called a Pelham police officer “the number-one reason we need school resource officers in schools” during an Aug. 9 award presentation at Pelham City Hall.

Bowman has been serving as the school resource officer in Pelham schools for many years, and is one of only two Pelham officers to ever lead the D.A.R.E. program in the city.

As a school resource officer, Bowman has had a near-constant presence in Pelham schools for many years, and works to do everything from counseling students in need to ensuring student safety.

Brookshire, a Georgia native who now lives in Auburn, said Bowman was instrumental in helping her found the K.A.R.M.A. organization, which works to combat bullying across the state.

“The best thing about Carrie is that she sees the best in everybody,” Brookshire said. “She does what she does because she loves the kids.”

Bowman praised the city and the Pelham Police Department, and said Brookshire has been able to transform her “dreams into reality.”

“For any child who has ever been bullied, it’s a nightmare,” Bowman said, noting Brookshire founded K.A.R.M.A. after she was bullied herself. “Jessica took a nightmare and made it OK.

“There are few people who can truly say they have reached their dream, and there are even fewer who can say they turned their dreams into reality. You have done that,” Bowman told Brookshire.

“When a child is in a D.A.R.E. program, they remember those people (who taught it),” Thomas said.

“The kids relate to officer Bowman in a positive way, and that pays dividends 20 or 30 years down the road,” Powell said.