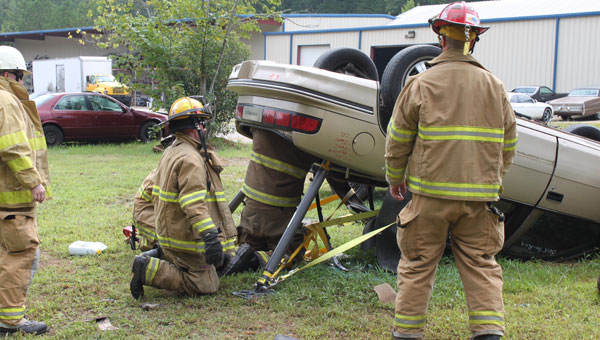 CALERA – Wrecked cars were strewn across Billy’s Toyota and Lexus in Calera as Calera firefighters in full gear practiced vehicle extrications from Aug. 7-9.

Fire Chief Sean Kedrick said the firefighters first stabilize the car before cutting the vehicle away from the trapped person.

“It’s time consuming, but we try to be efficient,” Kendrick said, noting the firefighters try to extricate individuals in less than an hour.

“Once we decide we have to extricate somebody, the vehicle is totaled because we have to cut it apart,” he added.

Kendrick said the department responded to 200 calls involving wrecks over the past year, which is less than 10 percent of its call volume.

“With 13 miles of interstate, we keep a fairly busy schedule with wrecks and extrication,” he said.

The fire department trained for three days so all three shifts of firefighters could practice.

Kendrick said the department has 29 full-time members and about 10 part-time firefighters. The firefighters are required to complete 20 hours of training each month, Kendrick said, and they train in trench rescue, vehicle extrication, structural collapse, hazardous material and high-angle rope rescue. 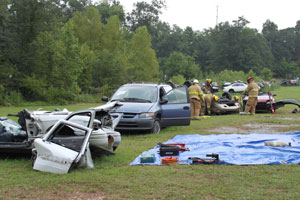 The equipment includes an air-powered chisel and airbags to lift the vehicle off the ground, as well as cribbing to stabilize the vehicle. The department also has pneumatic extrication tools, which Kendrick described as a “big can opener,” and is also known as the Jaws of Life.

“The biggest changes in recent years have been airbags and side-curtain airbags, which can pose a hazard,” Kendrick said. “We have to de-energize the vehicle.”

Kendrick also said hybrid and electric cars pose a hazard for firefighters because they have to de-energize the vehicles to safely cut into them to extricate victims. To de-energize a vehicle, Kendrick said they cut the battery cables and let the capacitors drain.

Billy Graham, owner of Billy’s Toyota and Lexus, has provided cars for the training for the past few years,” Kendrick said.

“We have several salvage yards willing to help us with vehicles,” Kendrick said. “It’s a resource a lot of cities don’t have.”

Graham said his business provides a safe training environment since the cars have been drained of all contaminants.

“It could be me or you or a family member in the car,” Graham said. “That’s why training is so important. It’s so vital these first responders can get you out quickly.”