A taste of Coney Island available in Alabaster 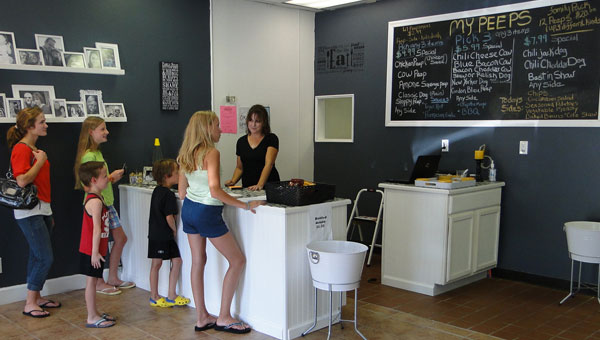 My Peeps owners, Mike and Jan Sherwood, say they have “the best sliders and dogs in the South.” Mike previously owned Michael J’s Deli and Tasty Hot Dog Hut in Alabaster. He “officially” returned to the restaurant business Aug. 1 after spending the past six years working in other fields.

“I closed Michael J’s in 2006 and worked as an auctioneer, then worked for a security business,” he said. “My heart’s always been in the restaurant business. Both Michael J’s and Tasty Dog were purchased businesses, but I’ve built My Peeps with a different concept of anything around here.”

Mike’s custom hot dog sauce has a Coney Island flavor, a little on the spicy side. Anything you can top a dog with is on the menu.

New to the area are speidies, which originated in the late 1920’s near Mike’s childhood hometown, Broome County, N.Y. The sandwich meat, beef or pork, is marinated three days and served on French bread.

Mike and Jan met when he owned Michael J’s Deli, which was located across the street from Jan’s dance studio, Southern Dance Arts, on Shelby County 11.

“I would go over for lunch and go back to work three hours later because we enjoyed talking,” Jan said. “We became good friends and got married two years ago.”

Mike and Jan have three sons, two daughters and five grandchildren. Their daughter, Alyssa, helps run the business when Jan is at the studio.

“We named the restaurant My Peeps because not only is it a legacy for our children, but our friends and customers are our people, our peeps,” Mike said. “Mi casa es su casa.”