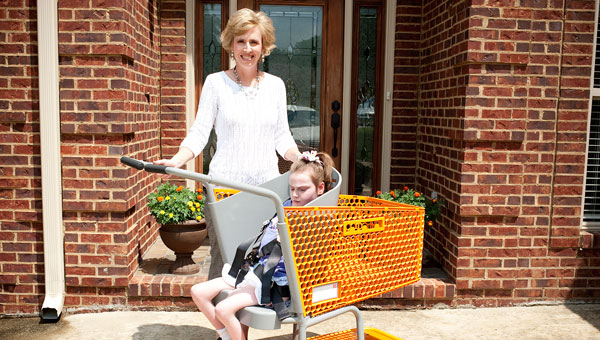 Drew Long and her daughter, Caroline, display a special-needs shopping cart they developed at their Alabaster home. The carts soon will be coming to Belle Foods supermarkets in Alabama and surrounding states. (File)

“Of course my dream is coming true, but it’s so much more than that,” Drew Ann Long said. “The dreams of thousands of parents all over the nation is also coming true. It’s great on so many levels.”

For the past several years, the Longs have been working to design Caroline’s Cart, a shopping cart for special-needs children. The Longs’ daughter, Caroline, has Rett Syndrome and was named the Easter Seals of Birmingham’s national child spokesperson earlier this year.

The Longs have been working with a Birmingham-based company to manufacture seats for the special-needs carts, and a Georgia company will distribute the carts to retailers across the nation.

“Our goal is to have the carts at retailers across the country, but I am very excited that the first stores that will have them will be here in Birmingham because that’s where I shop,” Long said.

“Belle Foods doesn’t have the carts yet, but they will be the first to get them. (The carts’ delivery) is so close I can smell them,” Long said with a laugh.

During the Aug. 11 Belle Foods grand opening, the company also donated a total of $50,000 to local charities, including the Muscular Dystrophy Association and Easter Seals of Birmingham.

The Birmingham-based Belle Foods company recently opened its first store in the former Bruno’s supermarket at the intersection of U.S. 31 and Lorna Road in Hoover. Belle Foods is preparing to open more stores in Alabama and surrounding states, including at the current Food World store in Alabaster.

The company currently is in the process of renovating the Alabaster Food World, and will hold a grand opening ceremony on Aug. 18.