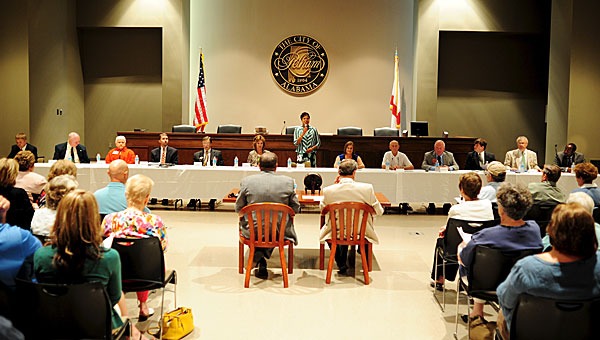 Pelham’s City Council candidates shared their thoughts on the city’s issues during a campaign forum Aug. 13 in the Pelham Police Department’s courtroom.

Hayes said he would work to improve Pelham’s schools and quality of life in an effort to draw more families to support Pelham’s economy.

Nichols, the current council president, said she would like the city to conduct a comprehensive study to identify Pelham’s needs.

Ladewig said the city should prepare marketing materials to recruit businesses, and said Pelham should quickly work to build a new library.

Lanier said the city should work to develop a “hub” on U.S. 31 to serve as Pelham’s downtown area.

McMillan said she would like Pelham to revisit its sewer rates, and said many Pelham residents view them as “a real financial burden.”

Mercer said Pelham should develop a strong marketing plans based off successful programs in cities such as Hoover.

Phillips said he would promote a positive working relationship between the City Council and the mayor.

Smith said the city should meet with Pelham business owners to determine “what is hindering them from being successful.”

Sullivan said Pelham residents should become more involved in community events, and said he would like to see a new library.

Meadows said Pelham should reallocate several million dollars in the city’s budget to help the city overcome some of its challenges.

Rice said the city should work to support its existing businesses while working to recruit new businesses.

By JAN GRIFFEY/Editor COLUMBIANA — Three men seeking the job as the next mayor of Columbiana shared similar goals for... read more