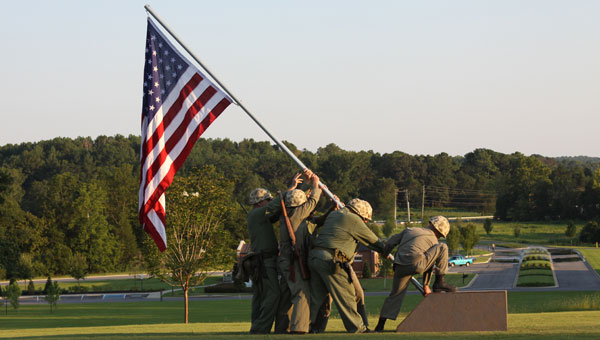 An Iwo Jima reenactment was performed by the Howlin’ Mad Smith Detachment of the Marine Corps League at the Alabama National Cemetery Aug. 12. (Contributed/Marshall Goggins)

MONTEVALLO – Hundreds visited the Alabama National Cemetery in Montevallo Aug. 12 to celebrate the 67th anniversary of the end of World War II.

Bugles Across America of Alabama and the Support Committee for the Alabama National Cemetery hosted the event.

At least 35 WWII veterans attended the ceremony, which featured a reenactment of the flag raising in Iwo Jima, a rifle salute by the Alabama National Guard Military Funeral Honors and a flyover by the Patriot Flyers.

Some of the veterans were a part of the Honor Flight Birmingham program, which flew almost 1,000 veterans to the WWII memorial in Washington, D.C. over the past five years.

Pam Nichols, co-director of Honor Flight Birmingham, was the event’s master of ceremonies.

“The majority of the veterans wouldn’t have been able to see that memorial if we hadn’t taken them,” Nichols said. “Several of the veterans we took were (in attendance Aug. 12) and were very complimentary. They’re so humbled by the fact that people remember and still honor them.” 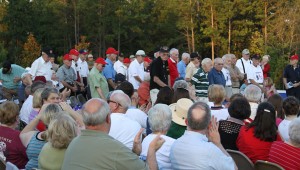 The event also included a proclamation from Gov. Robert Bentley, and Rachel Clinkscale of the Gold Star Wives of America, read a message from Edith Shain, the nurse famously kissed by a sailor in Times Square after the war ended.

“It was a tribute to those who lost their lives in World War II, as well as those who have died since,” said Bob Barefield, chairman of the support committee. “We recognized the World War II generation, both veterans and those on the home front. We had a moment of silence with a bagpiper playing ‘Amazing Grace.’”

The musical group Homeland sang a patriotic melody and music from the WWII era, and “Taps” was played by Gene Ramsay with Bugles Across America of Alabama at 7 p.m.

WWII officially ended Aug. 15, 1945 when Japan surrendered, but because of the time zone difference, the United States was informed of the victory on Aug. 14. The day is now known as Victory over Japan Day or V-J Day, according to a press release from the Alabama Department of Veterans Affairs.