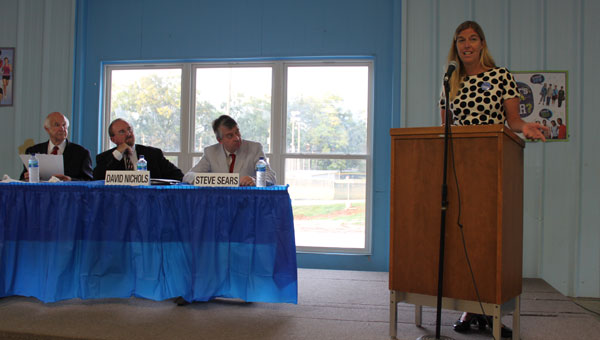 The forum, which was held at Montevallo City Park Recreation Building, was sponsored by Shelby County Chambers of Commerce and the Shelby County Reporter.

Hollie Cost, a professor at the University of Montevallo, has served on the City Council for two terms. With two young children in Montevallo schools, Cost said she is more motivated than the other candidates for Montevallo to reach its full potential.

“As mayor, I can make an even more significant impact, and that’s what I intend to do,” she said.

Cost said she is a “problem solver,” and originally joined the City Council because she wanted to see the city have a recycling facility, which came to fruition during her tenure on the council.

Cost said she and Council member Sharon Gilbert led the Shoal Creek-Prentice Village project in which community members have painted six homes, cleared debris and cleaned up the neighborhood near Montevallo Middle School.

“I want to work for the town and make it the best it can be. I want to brag to others about what Montevallo is,” Cost said.

Incumbent Mayor Ben McCrory is running for his second term in the position. Prior to taking office, McCrory held a senior management position for about 30 years in the business sector and served on “most of the boards of Montevallo,” he said.

“I’ve been involved before I was elected mayor,” McCrory said. “We have good leadership and a great town that can be greater. We still have a long way to go.”

McCrory said one of his top priorities would be bringing a hotel with conference center, as well as a clothing store to the city.

David Nichols grew up in Montevallo and attended Montevallo schools, including UM. He assisted in starting the first police department at UM, as well as serving on “numerous boards and councils” in Montevallo.