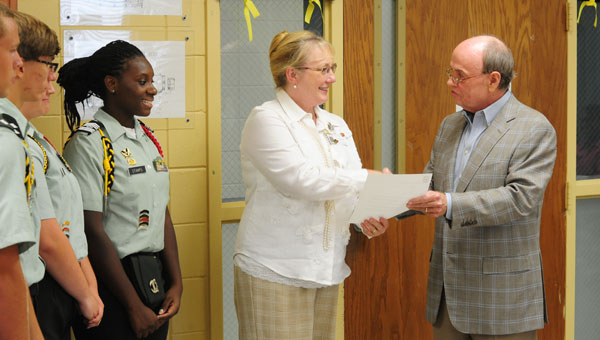 VINCENT – Applause erupted from the staff and faculty of Vincent Middle/High School when White Rock Quarries President and CEO Jim Hurley announced the company was committing $200,000 toward VMHS’s athletic fields and a new field house.

The announcement came during a luncheon in the school’s library sponsored by White Rock for the school’s faculty and staff Aug. 16.

“White Rock is looking forward to improving the schools of Vincent,” Hurley said.

Hurley said the commitment is the fulfillment of promises made in 2009 by White Rock to invest in Vincent’s schools and infrastructure.

“We felt like today is an important day to announce this,” Hurley said. “We’re very proud to recognize the academic achievement of this school.”

According to a map showing a blueprint for future construction, the funds will go to a new softball field, field house and band practice field below the baseball field.

Assistant principal and acting principal Dr. Diana Lee said she was overwhelmed by the announcement.

VHS Athletic Director John Hadder said the school’s softball players have had to travel off campus to play games and practice.

“Obviously, it is going to open doors we’ve never had open before,” Hadder said.

After the presentation, Hurley addressed “rumors” about the quarry’s delay in construction.

“A lot has been going on behind the scenes,” he said. “The last block we needed to check was securing an easement to the Coosa River for water discharge.”

Hurley said all permits should be obtained by the second quarter of 2013.

He said the delays were a result of a lawsuit by Vincent landowner Anne Gibbons, which claimed town officials ignored part of the town’s zoning code while considering White Rock’s rezoning application.

According to Hurley, Gibbons filed the lawsuit in February 2010, and in November 2011, the Shelby County circuit court ruled in favor of Vincent, the planning commission and White Rock. Gibbons then appealed to the Alabama Supreme Court, Hurley said. Hurley expects to have a ruling during the first half of 2013.

“We’re here to stay,” Hurley said. “We’re looking forward to being a part of successes both here and in Shelby County.”