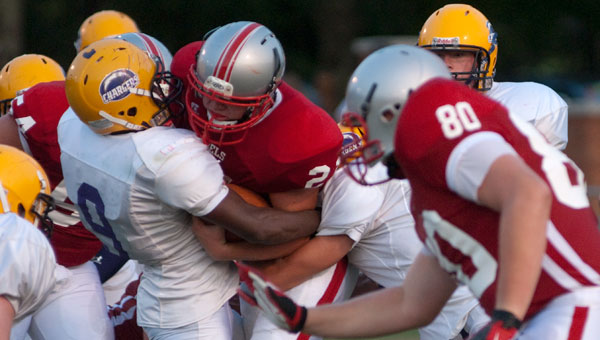 Cornerstone Christian School linebacker Nate Sawyer tries to bring down Coosa Valley running back Bradley Carroll in the Rebels' 28-8 win over the Chargers in the season opener for both teams Aug. 17. (Reporter Photo/Wesley Hallman)

HARPERSVILLE — If new Coosa Valley Academy football coach Arlton Hudson had any questions about his backfield entering the Rebels’ season opener against rival Cornerstone Christian, he found the answers he wanted in his team’s opening possession.

After three straight plays of three yards and a cloud of dust, running back Ryan “Buckshot” Brooks broke free for a 68-yard touchdown run to give the Rebels early momentum.

A pack of Coosa Valley running backs and a dominant offensive line wore down the Chargers in the second half in the Rebels’ 28-8 win over Cornerstone Christian in the season opener for both teams at Don Greene Rebel Field.

Brooks led the Rebels with 92 rushing yards and a touchdown on nine carries. Coosa Valley running backs, which included Adam McCranie, Bradley Carroll, Alex Nelson and Andrew Nelson along with Brooks, accounted for 205 rushing yards and four rushing touchdowns on 44 attempts in the victory.

“We’ve got amazing depth in the backfield,” said Brooks, a bruising runner who earned the nickname “Buckshot” after wearing jersey No. 00 on a baseball team in the past. “It’s better than we’ve ever had at this school, but we couldn’t do any of it without our offensive line.”

Hudson said the Rebels stuck to their game plan, which called for a stable of thoroughbreds in the backfield to take advantage of an impressive size advantage on the offensive line.

“That’s what we came out to do,” Hudson said. “The game played right into our hands where we wanted it.”

After Brooks gave the Rebels (1-0) an early 6-0 lead with his 68-yard touchdown scamper down the Coosa Valley sideline on the opening possession of the game, the Chargers took a lead into halftime thanks to a 19-yard touchdown pass from quarterback Adrian Young to running back B.J. Smith early in the second quarter. Following a fumbled snap, Tim Warren found the end zone for the two-point conversion to give the Chargers a 8-6 lead.

A pair of costly turnovers in the second half due to fumbled snaps allowed Coosa Valley to take command of the game.

Alex Nelson recovered a fumble early in the third quarter deep in Cornerstone Christian territory, which led to a 2-yard touchdown run by his brother Andrew Nelson three plays later. Carroll pounded his way into the end zone for the two-point conversion, which gave the Rebels a 14-8 lead with 3:15 remaining in the third quarter.

Carroll scored on a 6-yard touchdown run, the first of his two touchdowns in the victory, early in the fourth quarter and Zach Sharp added the extra point to push the Rebels’ lead to 21-8. The touchdown run came one play after a 52-yard pass from quarterback Niko Teofilo to wide receiver Tyler Hickman on a 3rd-and-17.

Hudson said the passing play was the turning point in the game.

“Once we completed that pass play,” Hudson said, “the game was in our hands.”

Following another fumble recovered by Alex Nelson, the Rebels melted clock and and added a late touchdown on a 6-yard run by Carroll. Eighth-grader Miles Sharp added the extra point to cap the scoring for the Rebels.

Hudson said he’s relieved to get his first win at Coosa Valley under his belt. The Rebels came out with a lot of energy in the opener against their biggest rival, but Hudson said the team needs to approach each game with the same intensity.

“I’ve heard all week how big this game was,” Hudson said. “We’ve got to come out and play our style of football no matter who we’re playing.”

Hudson said his team faces a big test in its region opener Aug. 24 against Autauga Academy, which features University of Alabama verbal commitment O.J. Howard. Howard is considered by many recruiting services to be one of the best players in the nation in the Class of 2013.

Smith led the Chargers (0-1) with 48 rushing yards on nine carries to go along with his two receptions for 24 yards and a touchdown. Smith also racked up a team-high 11 tackles.

Cornerstone Christian coach Tim Smith said turnovers in the second half were too costly for the Chargers to overcome.

“They don’t give you a win for the first half,” Smith said. “You’ve got to play four quarters. We’ve just got to keep working to get better.”