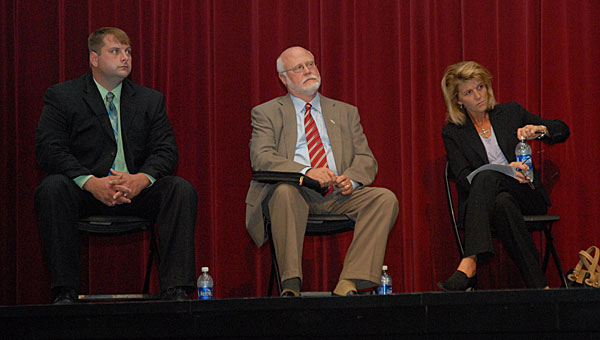 Alabaster’s mayoral candidates shared their thoughts on several issues facing the city during an Aug. 21 forum in the Thompson High School auditorium.

During the forum, which was sponsored by the Greater Shelby Chamber of Commerce and the Shelby County Reporter, mayoral candidates Kevin Brand, incumbent Mayor David Frings and Marty Handlon answered several questions related to the city’s economy, growth and future.

Brand, who is a Shelby County Sheriff’s Office deputy, said Alabaster has lost “that closeness of community” as a result of its rapid growth, and said he would support growing the Alabaster police and fire departments.

Frings said he has worked to build relationships with property owners and developers over the years, and said he and the members of the City Council and Industrial Development Board have worked well during his tenure.

Handlon, a certified public accountant who operates an accounting firm in Alabaster, said she would support bringing more office space into the city to allow Alabaster residents to work in the city, and said Alabaster should “have a full-time mayor.”

Alabaster’s municipal election will be held on Aug. 28 from 7 a.m.-7 p.m. at the Shelby County Instructional Services Center off U.S. 31.

FROM STAFF REPORTS The University of Montevallo women’s soccer team was voted to finish ninth in the Peach Belt Conference... read more