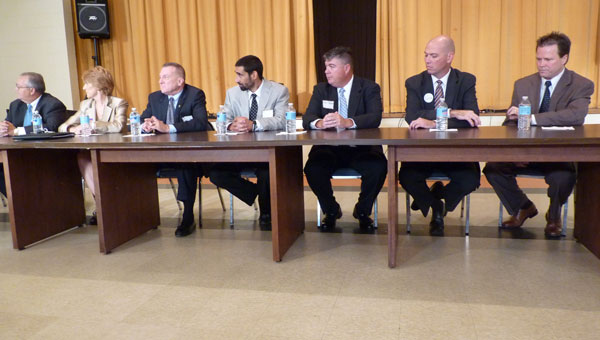 Hoover City Council candidates listen to the moderator at the beginning of a forum Aug. 21. (Reporter photo/Amy Jones)

HOOVER — Hoover City Council candidates gathered at the Artists On the Bluff facility Aug. 21 to share ideas and possibilities for the next four years with Hoover citizens.

The candidates were participating in the Hoover City Council Candidate Forum sponsored by BluffParkAL.org and the League of Women Voters of Greater Birmingham.

Place 1 candidate DeMarcus Hill and Place 7 candidate Ken King did not participate in the forum.

The economy was a hot topic during the forum, with several questions centering on economic issues such as how to bring new business to the city.

Greene said that while he understood that Hoover is a retail-based city, he’d like to have city leadership reach out to non-retail businesses, such as insurance companies.

Morrison spoke about how the sitting members of the council have worked to bring in people to boost Hoover’s business by bringing in hotels. She said if elected, she planned to continue those efforts.

Candidates were also asked about needs to be addressed in the city, and several answers focused on recreation for all age groups.

“We need more green space, and we need more recreational fields,” he said.

Teter said he felt the city should add more sidewalks and bike lanes for those who are active outdoors, and said Regions Park should compete with Pelham’s Oak Mountain Amphitheatre for concerts and other events.

Greene said he felt the Senior Center could be improved further, especially with an expansion.

All the candidates said they had a personal stake in Hoover City Schools, usually with children or grandchildren in the system, and would welcome the opportunity to work with school system officials.

Lyda said he’s impressed with the relationship between the City Council and the school system.

The candidates also touched on the issue of transparency in government.

“I think we’ve been totally transparent for the last eight years,” Lott said. “You can come to any meeting you want.”

Lyda said he considered Shelby County the gold standard for making information and documents easy to get online. He stressed that citizens would always be able to get in touch with him.

Cerniglia said he felt council members could be more accessible by being in the public eye more and making it a point to speak with citizens as much as possible.

Morrison said while she’s proud of the city’s transparency, she feels “there’s always room for improvement.” She said she’d like to consider making outlines of ordinances available to audience members during City Council meetings, for example.

In response to a question about enacting an “occupancy tax,” candidates said they would not support such a tax. Morrison, however, said she would be interested in the potential effects of a 1 percent raise in Hoover’s sales tax, which could go toward the school system.

Her opponent, Lyda, said he considered himself “the biggest fiscal conservative in the room” and would not support any new taxes on Hoover citizens.