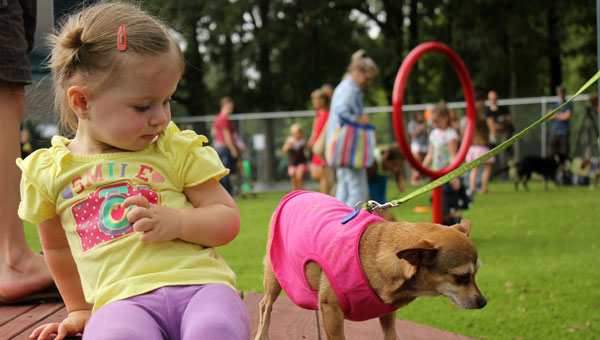 A girl plays with a dog on a small wooden bridge in Alabaster's Beneful Dream Dog Park in Veterans Park during the dog park's July grand opening. The DIY Network will be filming an episode of "Desperate Landscapes" at the park on Aug. 23. (File)

A nationally known show on the DIY Network will be spending the day in Alabaster on Aug. 23 while filming an hour-long special highlighting the city’s new Beneful Dream Dog Park.

Last year, Alabaster native Wilson and her dog Honey Belle won the Beneful Dream Dog Park contest, bringing a $500,000 new dog park to Alabaster’s Veterans Park. The contest challenged Wilson to answer the question “If you had $500,000 to create a dream dog park for you and your best buddy, what would you do?”

“(With Desperate Landscapes), they typically go in to a neighborhood and find a front yard that’s in really bad shape and then redesign it,” Wilson said. “With the dog park, they will kind of show the before, during and after.”

DIY crews have been filming at the park over the past several months, and attempted to wrap up filming the week the park opened in mid-July. However, inclement weather a few days before the park’s opening prevented film crews from getting the footage they needed, Wilson said.

“They said they didn’t get good footage last time because a lot of the dogs were on leashes, and the point of the park is to be off-leash,” Wilson said.

All local dog lovers and owners are invited to attend the filming, but are encouraged to wear solid-colored shirts to avoid being edited out of footage, Wilson said. Anyone with questions related to the filming should call Wilson at 837-4900.

The hour-long special is scheduled to air on the DIY Network on Sept. 26, Wilson said.

The park, which is carpeted with synthetic turf, features separate off-leash play areas for small and large dogs, splash pads, agility course elements, a miniature football field, a walking course and more. The park is open to the public daily.

Hoover City Council candidates listen to the moderator at the beginning of a forum Aug. 21. (Reporter photo/Amy Jones) By... read more