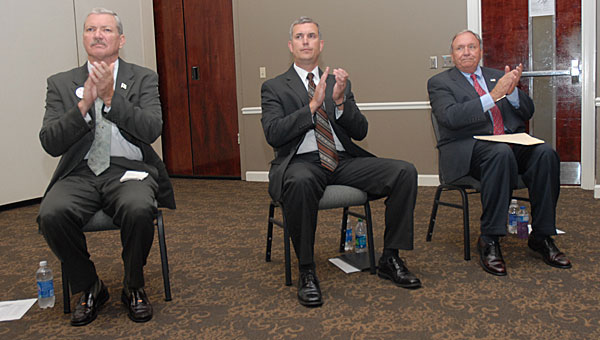 Pelham’s mayoral candidates got one more chance to discuss their visions for the city before the Aug. 28 elections during an Aug. 23 forum at the Pelham Civic Complex.

During the forum, which was sponsored by the Greater Shelby Chamber of Commerce and the Shelby County Reporter, incumbent Mayor Don Murphy and candidates Steve Powell and Gary Waters shared their plans for the city’s future.

Murphy also said he has “worked for the past five years to bring a hospital to Pelham,” said the next several years will bring much development near the intersection of Interstate 65 and Shelby County 52 and said he would like to work to reduce the annual losses on the Civic Complex.

Powell, Pelham’s former fire marshal who has served on the City Council for the past four years, said the upcoming election “is about what you (the voters) want,” and said he learned business knowledge through his father while growing up.

Powell said he would work to tout Pelham’s offerings, such as the Civic Complex, Oak Mountain State Park and Ballantrae Golf Club, said he would like to bring more community events to the city and said he would enact “strategic reviews” of the city’s departments.

Waters, who retired after serving as the Pelham fire chief for 24 years, said Pelham “is not doing as well as it could be,” and said he would hold regular town hall meetings and work to stop “business flight” by lowering the city’s sewer rates.

Waters said Pelham should revisit its “rigid” zoning laws, said he would like to build a new fire station on Shelby County 11 and said he is “the only one who has talked about specific issues with specific solutions.”

Voters will get a chance to cast their ballots for the mayoral candidates during the Aug. 28 election from 7 a.m.-7 p.m. at the Civic Complex.