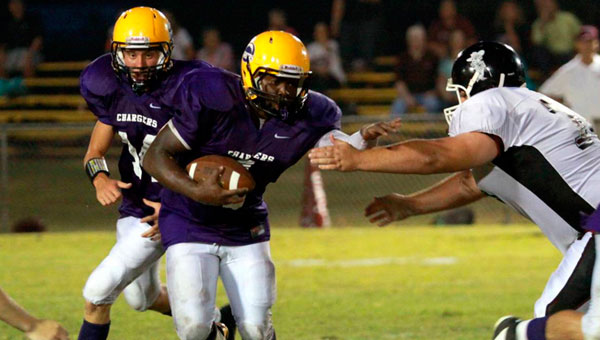 Cornerstone coach Tim Smith said there is always room for improvement, but said he did like how the game was played by both teams Aug. 24.

“This was an old-fashioned hit them in the mouth line up and do it again kind of game,” Smith said. “Kids cramping on both sides and our kids just kept playing.  We talked all week about finishing and they finished tonight.”

Smith said his team had to get better on defense, but he said he was pleased with the offense.

“It was a good night on the offensive side tonight,” Smith said. “We could run it and pass it well.”

The Chargers did not lead until running back B.J. Smith scored on a two yard run with 5:37 left in the game.

“I knew if we could just get the lead we would be ok,” Smith said. “It was tough to do that.”

The Chargers were led by Smith who had a monster night with 255 yards rushing and 3 touchdowns.  Quarterback Sterling Riether was 2-of-3 passes for 69 yards with a touchdown and had a rushing touchdown.  Adrian Young added 134 all-purpose yards (86 rushing, 48 receiving) with both a receiving and rushing touchdown.  Young had an interception on defense, also.

South Montgomery answered back with another rushing touchdown with 10:49 seconds left in the half.  After the failed two-point conversion the score stood at 13-6.

The Chargers got the ball back deep in their territory but drove 90 yards taking up more than four minutes capped off by a 31-yard run by Smith at the 6:18 mark.  The two-point conversion was no good leaving the score at 13-12.

South Montgomery quickly scored again putting the score at 19-12 after another failed two-point conversion with 4:31 left in the half.

Cornerstone finished the first half scoring with 42 seconds left in the half when Smith scored his second touchdown of the night on 18-yard run.   The Chargers again failed on the two-point conversion leaving the halftime score 19-18 in favor of South Montgomery.

South Montgomery produced the only third quarter touchdown at the 8:30 mark. They again failed the two-point conversion leaving the score at 25-18.

After recovering the bobbled kickoff, Cornerstone took over.  The Chargers, helped by some shifty runs on the drive by Smith, were able to take the lead for the first time at the 5:37 mark when Smith punched in a 2-yard touchdown run.    The two-point try was good and the Chargers led 32-25.

After Young picked off a South Montgomery pass and returned it deep into South Montgomery territory, the Chargers put the game out of reach when Young ran in a 14-yard score with a 1:46 left.