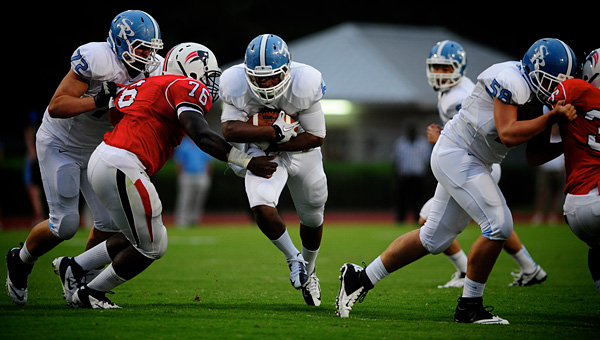 Spain Park High School senior running back Kevron McMillan finds a hole at the line of scrimmage in the Jaguars' 24-0 win over Homewood in a jamboree Aug. 24. (Reporter Photo/Jon Goering)

By CLAYTON HURDLE / For the Reporter

“This game was a good opportunity to play another team in a game atmosphere,” Spain Park coach Chip Lindsey said.

In the first half of the jamboree, the host Patriots began with a three-and-out before giving up a touchdown drive to Spain Park.

The Jaguars’ scoring drive was highlighted by Nick Mullens and Drake Grisham. The senior quarterback and senior wide receiver connected for a 32-yard gain shortly before Grisham caught a 9-yard touchdown pass from Mullens.

Spain Park was on the move again after a Homewood punt late in the first quarter, and despite a sack and 10-yard holding penalty, the Jags eventually scored with a 15-yard run by senior Kevron McMillan.

Trailing 14-0, the Patriots attempted a comeback drive. A couple of strong runs by Walter Rutledge were rendered pointless after Spain Park recovered a fumble near midfield.

The Spain Park offense took over with a 35-yard pass to Josh Rich, who had a fumble scare of his own near the goal line. The Jaguars recovered the football and McMillan pounded it in from a yard out.

The two teams traded possessions twice more before the scrimmage ended with the final score 21-0 in the Jaguars’ favor.

“Our defense did a good job stopping the run against two really good backs,” Lindsey said. “I was proud with the way they played tonight.”

The reserves portion of the scrimmage ended in a 3-0 Spain Park win that had its share of exciting moments.

“I think our brightest spot was that the two’s on our defensive line had some great moments,” Homewood head coach Doug Goodwin said.

The first quarter of the game was played mostly near the Homewood goal line. Although Spain Park’s offense frequently drove into opposing territory, they wound up taking two field goal attempts, only making one.

The failed field goal attempt was set up by an athletic interception made by the Jaguars’ Michael Jackson.

Neither team got much momentum going in the jamboree’s final quarter; the key moment was a Patriot touchdown erased by a block in the back penalty.

“We were inconsistent the whole way through,” Goodwin said. “We’ve got the talent; my only concern is our mental consistency.”

Spain Park travels to Austin next week and Lindsey has a positive outlook on what the Jaguars can take away from tonight’s scrimmage.

“It was good to pick out some little things that we need to clean up,” he said. “The intensity was there tonight, and that’s one thing I hope will carry over.”