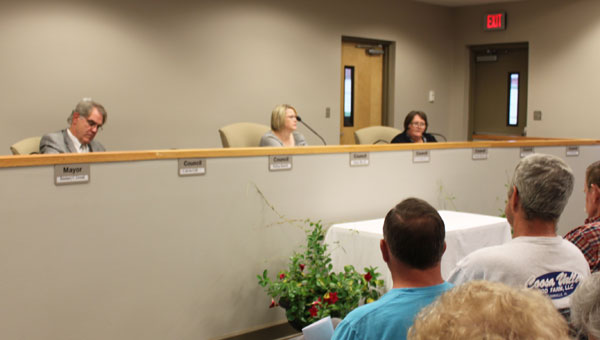 WILSONVILLE – Wilsonville Town Hall was standing-room only as residents crowded in to hear from the town’s two mayor candidates Aug. 24.

The political forum, which was sponsored by the county’s chambers of commerce and the Shelby County Reporter, offered a platform for incumbent Mayor Rosemary Liveoak and challenger Town Councilman Lee McCarty to give their views on the town’s future.

Originally set for Aug. 21, the forum was rescheduled as Liveoak took her 88-year-old uncle, of whom she is caretaker, to the hospital on the original date.

Liveoak is finishing her second term as mayor, and she served on the Town Council eight years prior to her time as mayor.

“Residents voting for me twice is a vote of confidence,” she said. “I am a positive leader, and I take pride in what I do. Look around Wilsonville, and tell me it’s not an inviting town.”

McCarty, an attorney by profession, is finishing his first term on the Town Council.

“We do have a terrific little town,” McCarty said. “In order to stay positive, we need money.

“I don’t like the way we’re spending money; I don’t think it’s being spent wisely,” he added.

McCarty said the town is “gambling” with its future, as the town brings in $100,000 net cash after a $1.3 million balloon note, or long-term loan.

Liveoak said she has worked with the council to spend tax dollars to improve the town. Improvements include paving subdivision roads and holding town celebrations, she said.

“We have competent people in fire and water, and what I need to do is listen to them,” he said. “We need to let the people who know what they’re doing to do it. We probably need to supervise, but let them do their jobs more efficiently and therefore save more money.”

One of the forum’s main themes revolved around the town’s need for a bank, an issue on which both candidates agreed. The town previously purchased the former M&F Bank building for $140,000, according to McCarty. The town’s Commercial Development Authority has distributed more than 100 brochures to bankers and financial institutes with the intention of bringing a bank to Wilsonville, Liveoak said.