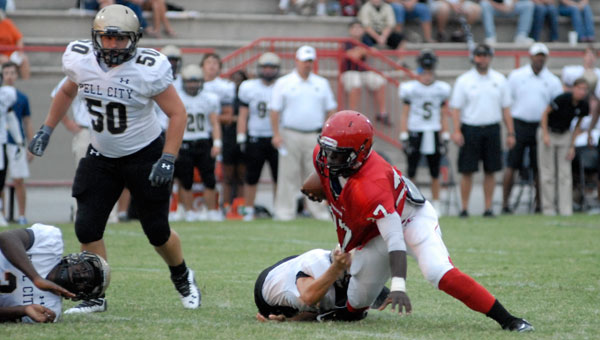 A Pell City defender tries to bring down Thompson High School junior Dee Tolbert during a punt return in the Warriors' 37-14 win over the Panthers in a preseason jamboree Aug. 24. (Reporter Photo/Wesley Hallman)

ALABASTER — The final score won’t matter at the end of the season.

The victory won’t appear in the win column. The statistics won’t impact any school records.

None of the above matters.

The Thompson High School football team needed a night like Aug. 24 in the worst way. The Warriors needed their 37-14 win over Pell City in a jamboree.

“It’s been a long time since we’ve executed like that,” said first-year coach Michael Montgomery, a former assistant coach.

The Warriors couldn’t have asked for better execution with one week remaining before the season opener.

Thompson racked up 331 yards of total offense in the opening half, compared to 124 total offensive yards for their opponent. Thompson senior quarterback Trey Matherson had a career night, passing for 317 yards and three touchdowns.

Devonte Smith rushed for 72 yards and a touchdown, while Tedarius King also added a rushing touchdown.

The Warriors’ special teams unit played well, too, with kicker David Buckalew and Christian Jetzel trading places on kickoffs and extra point attempts and Hunter Black booming one punt after another.

Montgomery said his team was ready to put its hard work in the offseason to use in a live scrimmage.

“We’ve squeezed as much out of the guys as we could,” Montgomery said. “It was time to attempt to beat somebody else up.”

Buckalew gave the Warriors an early 3-0 lead with his 52-yard field goal at the 7:35 mark in the opening quarter.

Following a touchdown by Pell City midway through the second quarter, the Warriors pushed their lead to 24-7 following a 66-yard touchdown pass from Matherson to Reeves and an extra point by Jetzel with 6:26 remaining in the first half.

The Warriors carried a 31-7 lead into the locker room at halftime following a 25-yard touchdown pass from Matherson to Franklin and an extra point by Buckalew with 33 seconds left in the second quarter.

Despite the impressive jamboree performance, Montgomery said his team still has work to do in preparation for its season opener Aug. 31 on the road at Shelby County.