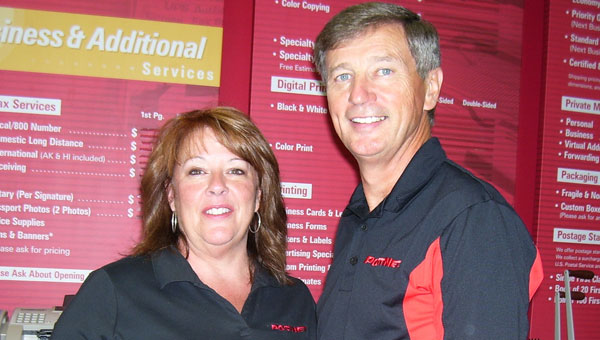 “When we aren’t working you can usually find us in our yard,” said Diane Thomas, who with husband Gene owns Chelsea Postnet.

They enjoy being outside on weekends, where they work in the yard, watch the many species of birds they’ve attracted, play with their two dachshunds and cook out, Diane said.

They also enjoy having friends over for food cooked by one or the other of them. Gene is the “master outdoor cooker,” while she is the “indoor chef.”

Their dogs Badger and Hollie love having them home, too, and help keep them busy.

“Hollie loves to dig, which is her natural instinct,” she said. “Dachshunds were bred to hunt badgers, the name translates badger dog. She seems to think we have millions in the yard, especially if there is mud involved — even though she won’t go outside if the grass is wet — so she gets lots of baths.”

“Badger, the male, likes to play soccer with his tennis ball. He’ll roll it across the floor with his nose and expects you to kick it back to him. He really likes you to try and get it by him and few rarely do. He would be a great goalie and lap dog.”

Their favorites among the birds visiting the birdhouses in their yard are the bluebirds.

“We had two bluebird families this year,” Diane said. “They are so entertaining to watch when the babies arrive. The female or the male will feed them while the other stands guard nearby in a tree and will attack anything that comes near the nest.

“We also have lots of hummingbirds and this time of year they are practically swarming our yard. They are fun to watch zoom around and fight each other off the feeders. I’ve read they really are fighting, but I like to think they are playing, their chattering sounds like laughter to me.”

The Thomases have an adult son, and he and his wife are about to give them their first grandchild, who is sure to be a great rival for the couple’s time.

Move over Badger and Hollie!

Four-legged clients are the best

By SHELBA NIVENS/ Community Columnist She has a window near her grooming table where she can hang a bird feeder... read more