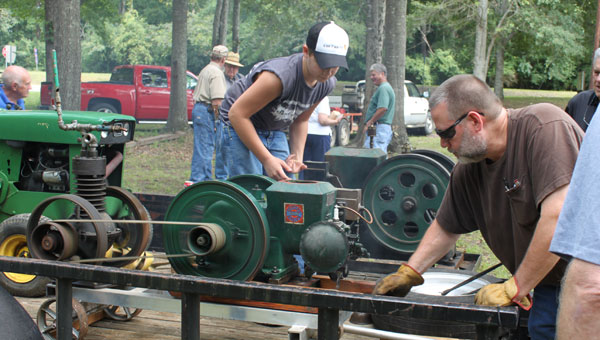 Ryan Atchison and his father, Richard, crank up one of their antique engines at Shelby Iron Works Aug. 25. (Reporter photo/Christine Boatwright)

SHELBY – Antique engines of all kinds were puttering along during the annual Shelby Iron Park Engine Show Aug. 25.

The engine show showcased local vendors, as well as engine collectors. The park’s blacksmith shop and museum were open for the event.

Wilsonville residents Richard Atchison and his son, 13-year-old Ryan, attended the engine show with a trailer loaded with antique engines, including a one-and-a-half horsepower Stover engine and two hit-and-miss engines.

“We’re cooking with oil now,” Ryan Atchison said as one of the engines began running smoothly.

Richard Atchison said he maintains the engines as a hobby and teaching lesson for his son.

“I try to teach him the way things were. Kids play videogames, but they don’t know anything about the way it was back then,” Richard Atchison said. “Now, if a lawn mower breaks, most people take it to get it repaired. I’m trying to teach him how to fix it himself.”

The park’s fall festival and antique tractor show will be held Oct. 13-14 from 8 a.m.-5 p.m., according to Trimble. Visitors can see the gristmill and sawmill in action, as well we visit the museum, see more than 50 antique tractors and purchase freshly made sorghum syrup.

“It’s the best sorghum syrup you’ve ever had in your life,” Trimble said.