From mourning to joy with GriefShare 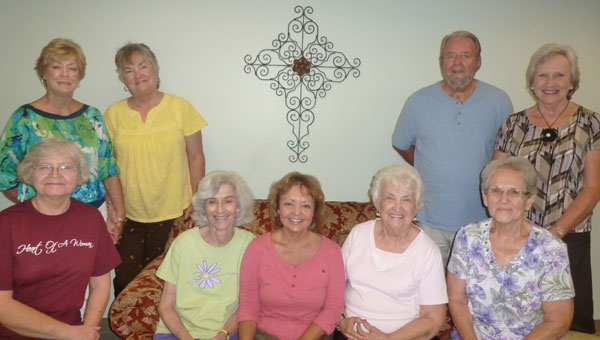 Members of the Friendship Group from the GriefShare class at the First Baptist Church of Columbiana. Front from left are Pattie Ellison, Gay White, Dolores Jones, Bonnie Atchison and Caroline Johnson. Back from left are Joyce Horton, Patsy Ellis, Tony Serio and Gayle Austin. (contributed)

Dolores Jones is a living example of God’s healing power from mourning to joy after her husband Danny committed suicide in November 2010.

A committed Christian, Jones believed that with God’s help she would get through this terrible time.

Jones stayed busy and had great support from family and friends. She was active in her church, a leader in Community Bible Study, involved in Vignette club work, had a good job and fulfilling hobbies. Close friends took her out to dinner or to a movie once a week.

“I believed that if I was a Christian, I did not need counseling,” said Jones. “If I was a believer, I would be OK.”

But after nine months, Jones was still struggling, had trouble sleeping and was not eating properly. She heard about a support group called GriefShare at Kingwood Church in Alabaster and thought she would try it one time.

“After the first session, I knew God had put me there. The class was a turning point in my life,” said Jones. “If you live long enough, you will lose a loved one. I was waiting for my life to return to normal. Through this class I learned life will never be as it was. I had to find a new normal.”

After the 13-week session was over, Jones was led to bring GriefShare to Columbiana. With support of her pastor, Mike Miller, at First Baptist Church of Columbiana, Jones began leading GriefShare in March 2012. More than 44 people attended the classes, a boot camp for healing, which use a workbook with questions for journaling, a video and sharing. The group is Biblically based but non-denominational.

The bond created by the common loss of a loved one — whether spouse, child or parents — is strong. After the sessions were over, a Friendship Group was formed that has met over the summer to share, pray and fellowship.

A new GriefShare support group will begin Sunday, Sept. 9 at 5:30 p.m. in the Conference Room at the First Baptist Church of Columbiana. For more information, contact Dolores Jones 669-9633 or nana109@bellsouth.net.