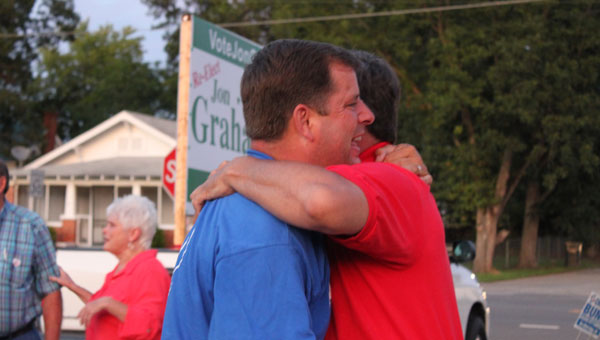 Graham let out a holler as the results were announced.

“Hard work pays off. Having good help is the key,” Graham said. “I thought today began as a dreary day and that would hamper voters, but it turned out to be a beautiful day and the results are fabulous.

“I’m thrilled to have the opportunity to give four years to the city,” he added.

Gentry said he had very little to say about the results.

“That’s what the people of Calera wanted, and that’s what they got. That’s basically it,” Gentry said. “They did not want leadership; they wanted the same-old type of program that’s been going on here for years. And they’re going to get it. Really, I have nothing to say.”

Roberson could not be reached after multiple phone calls.

Calera’s six at-large City Council positions were filled with a mix of incumbents and new faces during the election. Residents were able to vote for one mayor candidate and one council candidate in the polls.

“I’m happy and ready for another four years,” Bradshaw said.

“The only reaction I have is I want to thank the people that came out and voted. They spoke, and I really appreciate it,” Bunn said. “It’s nothing that I did. I went out and campaigned, and people responded. I want to thank them.”

Ernest Montgomery, who earned 246 votes, said he hopes to accomplish more during the next four years.

“We’re excited about it. We thank all of our supporters who came out to support us,” Montgomery said. “We’re looking forward to another four years and hoping to get a lot more accomplished.”

Bobby Joe Phillips earned 235 votes and has served on the Calera City Council for 36 years.

“I’m glad I’m back on there. I’ve been on it for 36 years, and I’m proud to be on it again,” Phillips said. “We’ll continue to carry this city forward.”

Philip Busby, who won a council seat with 270 votes, said the election had a good turnout.

“I’m very excited, very pleased. I’m looking forward to working with this council and Jon (Graham),” Busby said. “I’m excited about the council. I think it’s some good choices. I think Calera spoke and came out, and I think it was a good turn out considering the storms.”

Alan Watts, who garnered 180 votes, has run for the City Council twice in the past.

“I’m very appreciative the citizens of Calera voted me in,” Watts said. “I’m very happy. this is my third time to try, third time to run. I’m very excited, and I look forward to what things are coming in the future.”