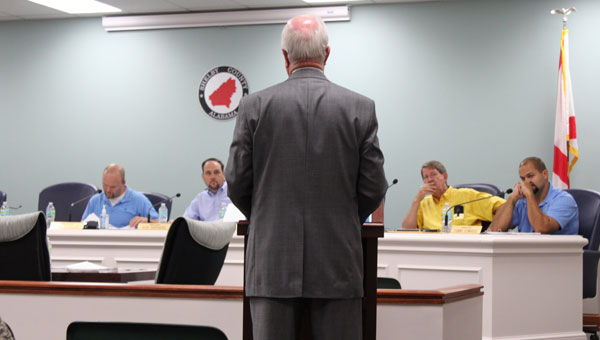 In his proposed 2012-13 budget, Curry asked for more than $5.5 million more than the previous year’s budget.

“We’re obligated by law to tell you our needs,” Curry said. “You can’t possibly fund what you don’t know about. If I haven’t told you our needs, I haven’t lived up to my duty. My duty is to inform you of the needs of the sheriff’s office.”

The sheriff’s proposed budget included additional funding primarily for employees’ salaries and benefits, as well as the purchase of vehicles.

“The increase was relative to the additional personnel, which would be salaries for deputies and correction officers that we need and haven’t been provided over the past 10 years,” Curry said. “Also vehicles, when you add a deputy, they have to have something to ride in.”

Curry said he requested a meeting with the public safety committee prior to the work session, but received no response.

“We’ve had one meeting. (County Commissioner) Rick (Shepherd) called the meeting in April. It was the first time since April 2003 that the committee met with us,” Curry said. “We have a lot of things to cover. We’re mandated by law to perform certain functions. In order for you folks to make good decisions, I felt it was valuable to have a couple of your members have firsthand knowledge.”

County Commission Chairman Corley Ellis, a member of the public safety committee, said he has toured the jail and ridden with patrolmen, as Curry requested.

“If there’s new information, I’d like to have it, but I don’t want to do and hear the same things over and over,” Ellis said.

Ellis asked Curry where the additional funds would come from in the county’s budget.

Curry mentioned the county’s expenditures on upcoming projects, such as the expansion of the water treatment plant, landfill expansion, Shelby County Airport additions and the fire museum.

Ellis said the general fund budget is “a lot more limited than the sheriff seems to think,” and funds from the lodging tax, which is funding the fire museum, is earmarked for certain projects.

Ray Hamilton, manager of development services, said he has heard the same requests from former sheriffs during the 24 years he has been presenting his own budget.

“It sounded like (Curry) has all the answers. It seems like he should be able to manage with less or at least work with the team,” Hamilton said, noting he had to fire seven employees due to budget cuts.

“We keep on keeping on, and my staff says that’s what we should do,” Hamilton added. “We should suck it up hard and be part of the team. We don’t need to spend, spend, spend. We need to plan and manage. It ain’t nuclear physics.”

Ellis said the commission has done “everything in our power to not cut the sheriff’s budget, and so far, we haven’t.”

“We cut about $5 million from our general budget, and the sheriff comes in and asks for that,” Ellis said. “The money is just not there.

“Ray (Hamilton’s) comments are what we’re dealing with now,” Ellis added. “We have a morale issue. People are getting frustrated. They’re running leaner and leaner. All of our departments countywide have made cuts on their own. All of our departments are coming in under budget except the sheriff, and they’re doing that on their own. They’re being team players and getting frustrated the sheriff isn’t doing the same.”