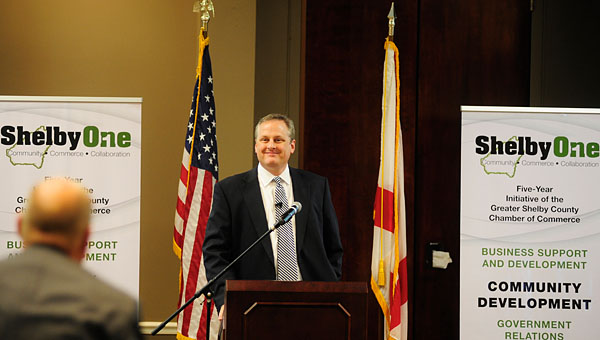 The Greater Shelby Chamber of Commerce has already secured pledges to cover 62 percent of its fundraising goal for the organization’s five-year strategic plan, chamber officials announced as they kicked off the campaign during an Aug. 29 luncheon.

During the luncheon, the chamber kicked off its Shelby One campaign, which will seek to raise $1.7 million over the next five years to fund several goals, such as business support and development, community development, government relations and county marketing and communications.

Through Shelby One, the chamber is looking to work with local business owners, school and government officials to impact four key areas of Shelby County’s future growth, chamber officials said during the luncheon.

Over the next five years, the chamber is looking to spend $395,000 on helping to support existing small and retail businesses and is planning to spend $730,000 on working with elected officials, business and industry leaders and college and university officials to support quality-of-life issues and ensuring the success of the county’s workforce.

Shelby One also calls for spending $325,000 to work with local governments to support transportation, education and business recruitment issues, and for spending $250,000 on marketing Shelby County as a whole.

“Shelby One is your chamber’s strategic plan for the next five years. It will allow Shelby County to speak with one voice on those initiatives,” GSCC Chamber President Kirk Mancer said after the spending goals were announced. “I am tasked with producing measurable, tangible results in those four areas.”

“The county, along with cities, along with businesses can define the new normal to employ those unemployed folks (in Shelby County),” Dudchock said. “Over the next three to five years, if we are successful, we should have someone on an annual basis stand up here and talk about re-employment and better employment.”