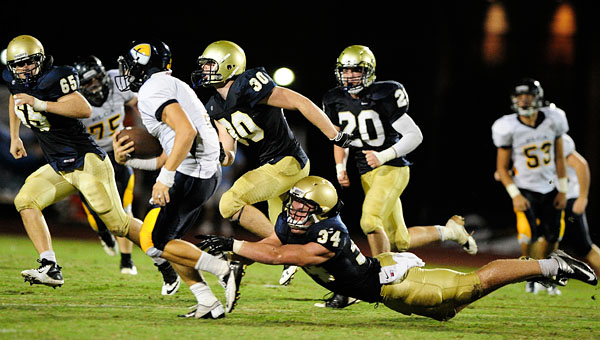 Briarwood coach Fred Yancey said he was disappointed on how his team played, but he gave Eagles Landing credit.

“They were a much better team than we played last year,” Yancey said. “They were a lot better than we were.”

Sophomore quarterback Chandler Wilkins came off the bench to throw the lone Lions touchdown.  Yancey did not know who he would start at quarterback next week against Sylacauga High School.

“I can’t make decisions right now about next week,” Yancey said “I’ve got to watch tape.”

Eagles landing scored on the opening drive of the game with a touchdown at the 6:14 mark of the first quarter. The Chargers missed the extra point leaving the score at 6-0.

After both teams traded punts, Eagles Landing scored again on a long touchdown run with 2:13 left in the opening quarter.  The extra point was blocked keeping the score at 12-0.

The lone Briarwood touchdown drive started with 47 seconds left.  Wilkins came off the bench to throw the 50-yard pass to senior starting-quarterback-turned-receiver Daniel Robert as time expired on the first half.  The halftime score was 19-7 after the extra point.

“We were just trying to get down the field to a great receiver and he made a real nice play,” Yancey said about the scoring play.

In the third quarter, Eagles Landing added a field goal with 4:38 remaining to stretch the lead to 22-7.  The Chargers extended their lead again with a touchdown and extra point with 1:49 left in the third making the score 29-7.

The only scoring of the fourth quarter was a field goal by Eagles Landing to end the scoring at 32-7.

Wilkins completed 7-of-11 passes for 77 yards and a touchdown. Robert started the game at quarterback and was 6-of-18 passes for 66 yards.  The leading rusher for the Lions was Robert with seven rushes for 18 yards.  Senior running back Keith Shamblin led the Lions in receiving with five catches for 69 yards.

Warriors take down Wildcats in opener