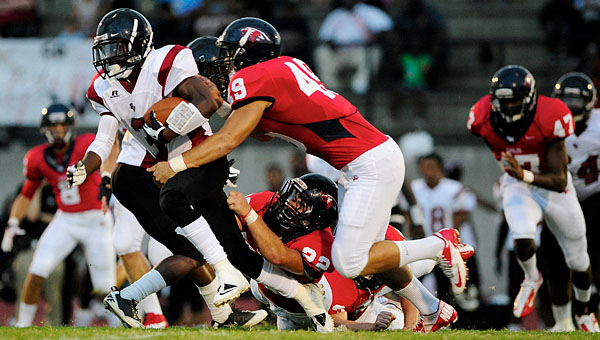 NORTH SHELBY — The first and only kick that Oak Mountain blocked tonight provided the game’s winning score, as the Eagles defeated Shades Valley, 8-7, in their home opener Aug. 31 at Heardmont Park.

With 20 seconds to play, the Mounties lined up to punt but a badly placed snap caused punter Chad Riggins to kick with an onslaught of Oak Mountain defenders rushing at him. The ensuing block by Eagle defensive back Chris Johnson sent the ball soaring out of the Shades Valley end zone for a safety.

A highly contested first game of the regular season for both teams, the game featured two blocked Oak Mountain kicks earlier in the game.

Near the end of the second quarter, quarterback Jake Adams scored a touchdown on a four-yard run. The Mounties’ special teams unit blocked the extra point attempt that would have tied the game at 7-7 going into halftime.

The Eagles’ first drive of the second half stalled at the Shades Valley 11 and the Mounties succeeded in blocking Michael Cole’s field goal attempt.

“We’ve got to work on our field goal team, there’s definitely some stuff to clean up in that regard,” Oak Mountain head coach Chris Bell said.

In the end though, it was Johnson, a junior who plays wide receiver on offense, who was in the right place at the right time, which happened on many instances for him in this game.

“I thought their punter made a heck of a play on the ball, but [Johnson] kept hustling and finished the play,” Bell said. “It was huge because if [Riggins] gets that kick off and the ball rolls dead, that might have been the last play.”

Johnson also made several key stops with the Eagles’ defensive unit and had a contributing role on offense.

“He’s just a great kid with a tremendous work ethic,” Bell said about Johnson. “He’s been playing with a beat-up wrist and just got his cast off today. He’s a great, hard-nosed kid that we can build our program around.”

For the Mounties, a game that started with high expectations ended on a sour note.

“Going into the game, I was really excited about all three of our phases,” Shades Valley coach Bill Smith said, “[but] we just kept shooting ourselves in the foot because we didn’t put up more points and we didn’t produce.”

The Mounties play next week against Mountain Brook while Oak Mountain heads to Wetumpka.