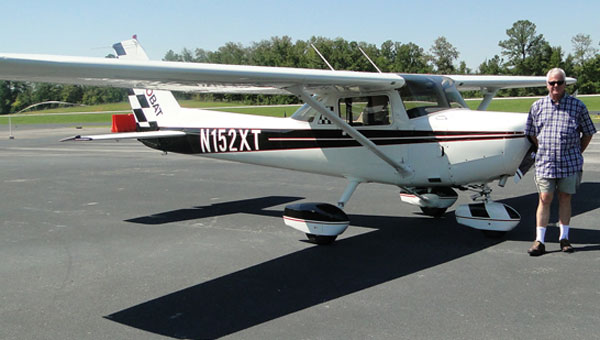 When RexAir LLC owner Rex de Foor contacted me about his business, I recalled words spoken to myself several months ago, “If I could fly in a private plane, I would get past the fear of flying.”

I drove to the Shelby County Airport not sure if I would taste my words.

“I use it for instruction because it’s easier to handle,” de Foor said. “Because it’s lighter and smaller, the student really has to fly the plane instead of just sort of being on cruise control, learning more about aerodynamics and air behavior in my opinion. The 172 is good for group scenic tours.”

De Foor, a 1973 Shelby County High graduate, began flying while stationed at Fort McClellan and has no accidents or incidents in his 39 years of flying. Though he didn’t utilize his flight training in the military, Reinhardt is a retired military pilot with jet fighter time under his belt, as well as tanker time. He’s also a former vice commander of the Air National Guard in Birmingham.

De Foor began flight instruction eight years ago at the Birmingham Flight Center, working his way up to chief instructor. He now gives lessons at the Bessemer and Shelby County airports.

“I train beginning students, as well as give advanced flight training,” he said. “Look around. You see all white-headed guys walking around here. If I could have one wish come true, it would be that I have the opportunity to tap into young people and get them to take a discovery flight. Training starts at any age, but you must be 16 to solo.”

De Foor’s easy-going, pleasant personality made it possible for me to climb into the plane. Not only did I taste my words, but I flew pilot in command. It was one of the most exhilarating experiences of my lifetime!