Warriors take down Wildcats in opener 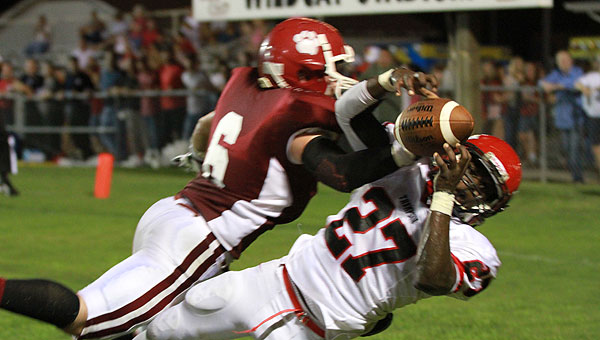 Thompson High School receiver Dee Tolbert reels in a touchdown pass with Shelby County defensive back Jacob Tidmore trying to knock the ball out of his hands in the Warriors’ 42-6 victory Aug. 31. (Contributed/Eric Starling)

COLUMBIANA -— Thompson High School football coach Michael Montgomery didn’t mind his players celebrating a 42-6 win over Shelby County in the Warriors’ season opener Aug. 31 at Papa McCombs Stadium.
Montgomery just wanted his players to keep things in perspective. His post-game speech quickly turned toward an Alabama High School Athletic Association Class 6A, Region 4 opener Sept. 6 against Chelsea.
“Each week,” Montgomery said, “the competition is going to get harder and harder. We’ve got to step up.”
Dee Tolbert stepped up for the Warriors in the first meeting between the schools since 1999, racking up 99 receiving yards and three touchdowns on just six receptions.
Devonte Smith added 103 rushing yards and two touchdowns on the ground.
Brandon Shields led Shelby County with 107 rushing yards on 14 carries.
Smith gave Thompson (1-0) an early lead with his 29-yard touchdown run with one minute remaining in the opening quarter. David Buckalew converted the first of his six extra-point attempts to give the Warriors a 7-0 lead.
Tolbert reeled in a pair of touchdown passes from Trey Matherson in the second quarter, including a 17-yarder and a 26-yarder, to help the Warriors push their lead to 21-0 at halftime.
Thompson pushed its lead to 28-0 following a 9-yard touchdown pass from Matherson to Tolbert with 6:33 remaining in the third quarter. Shelby County finally put points on the scoreboard after a 3-yard touchdown pass from Ty Proctor to Cody Jones with 3:16 remaining in the third quarter.
Smith added a 7-yard touchdown run late in the third quarter and Tedarius King broke free for a 39-yard touchdown run with 8:15 left in the game to cap the scoring.
“Our goal is to get better one day at a time,” Montgomery said. “We’ve based our success on each play.”