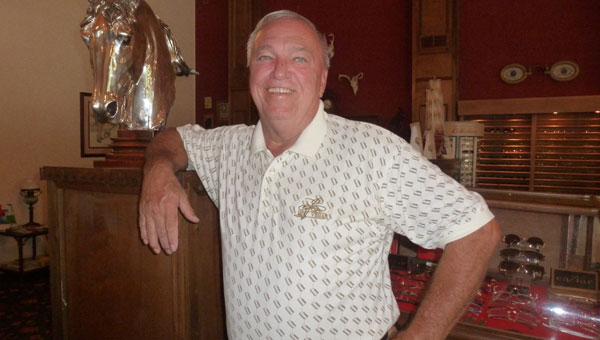 Handley grew up in Saginaw. His father, Loyd, was a horseman who broke and shod horses. Mother Elda worked at wage-paying jobs to supplement the household expenses of raising three sons. From his parents, he learned the value of honesty, hard work and toughness.

Handley graduated from Thompson High School and earned a bachelor’s and Optometric Doctor degrees from UAB. When he looked for a place to start up his medical practice, Handley wanted an area that was rural and family-friendly. Columbiana met all his needs.

The year 1980 was a turning point in Handley’s life when he purchased the historic Verchot/German house, built in 1892, from the builder Joe Verchot’s granddaughter, Mary Nell Skelton. Skelton’s desire was that this historic treasure be restored to its original beauty, not remodeled. Handley has spent the last 32 years fulfilling that dream.

From his research of the Verchot family, Handley developed a love of not only his new home but also of Columbiana that has developed to the passion he has today. When he bought the building on Main Street, where his business is located, he restored it to become a favorite landmark complete with a mural that includes his father’s image as a country doctor driving his buggy with Loyd’s favorite horse Bob and mule Kate.

“When you make a living in a community, I feel you have an obligation to give back to it,” said Handley. “Columbiana is a rough diamond and I want to see it become the crown jewel of Shelby County. I want to help polish the many facets of this great city.”

Handley knows Columbiana from his many years of service to our community such as serving on the City Council, Public Works Committee, Beautification Board, and Merchants and Professional Association, where he founded Cowboy Day.

“Stancil is a good, loving, kind husband and father,” said wife Ann. “He would do anything to make Columbiana a better place for us all, not for personal gratification, but because he loves Columbiana. Columbiana is his passion. “

From mourning to joy with GriefShare

Members of the Friendship Group from the GriefShare class at the First Baptist Church of Columbiana. Front from left are... read more