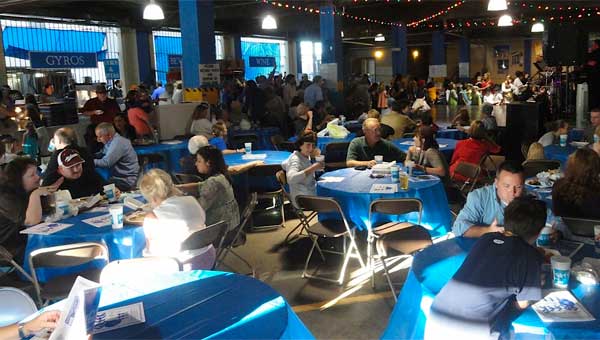 Thousands of people attend the Birmingham Greek Festival each year.

Jimmy Cosmas can remember cleaning up at the Birmingham Greek Festival decades ago.

This year, Cosmas, who lives in north Shelby County, is heading up the annual celebration, which is sponsored by the Holy Trinity-Holy Cross Greek Orthodox Cathedral. Helping Cosmas is more than 100 volunteers, who have spent the last month baking and making other preparations.

“This year is the 40th anniversary,” said Elaine Lyda, the public relations consultant for the festival. “It’s literally the third generation working it.”

Tens of thousands of people are expected to attend the festival, although Cosmas said he didn’t have an exact number.

“All I know is come Friday you can’t see where the sidewalks stop,” Cosmas said.

The volunteers have increased the amount of food they will make. Those numbers include 15,000 pieces of baklava and 3,700 pounds of ground beef for the pastitso, which is Greek lasagna.

“We bake everything ourselves. That’s what makes it so unique,” Lyda said.

Food is the big draw for many visitors. Take-out meals account for 40 percent of the festival’s business, and drive-through and walk-up lines are available this year.

The festival has numerous activities for visitors who decide to stay for a while. A Greek band will play, and dancers of all ages will perform during the festival.

A Greek market will also be set up at the festival, selling food, jewelry, art, icons and more.

Church members also give tours of the cathedral, which is one of the oldest in the United States. Lyda said visitors are usually interested in both the cathedral’s architecture and Greek Orthodoxy.

“We actually pick up a member or two,” Cosmas said of the tours.

Volunteers have spent the past several months working to improve Pelham High School's Ned Bearden Stadium in time for the... read more