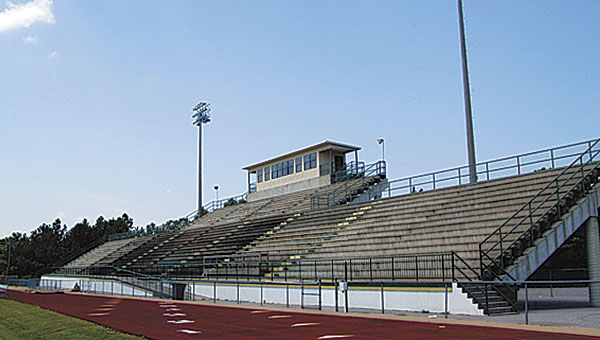 Pelham High School’s Ned Bearden Stadium will have a fresh new look for the Panthers’ first home game of the season on Sept. 14 against the Thompson Warriors, and soon will have a new ticket booth at its main booth.

Volunteers with the Panther Pride Project, which was organized by PHS football parent Leah Hays, worked throughout the late spring and summer to clean and renovate several areas of the stadium.

The volunteers have pressure-washed the front and back of the stadium’s bleachers, placed new gravel around the stadium’s plants, painted paw prints on the stadium walkway and much more.

“They’ve done a lot of very positive things,” said PHS football coach and Athletic Director Brett Burnett. “The group has really taken an interest in continuing to upgrade the stadium.”

Burnett said the volunteers worked nearly every Saturday throughout the summer beautifying and upgrading the stadium. To volunteer or learn more about the Panther Pride Project, visit facebook.com/pantherprideproject.

Another group of volunteers, the Pelham Athletic Association, also recently helped to raise money to update another part of the stadium. On Sept. 4, crews demolished the old ticket booth near the stadium’s west parking lot, and are scheduled to have a new ticket booth in its place in a few weeks.

“The Pelham Athletic Association really spearheaded that project,” Burnett said, noting the old ticket booth struggled to keep up with crowds at the stadium. “Hopefully, the new booth will allow us to get more people in more efficiently.”

The new ticket booth building will feature four ticket windows on the outside and windows to sell merchandise such as T-shirts and fan gear on the other side.

Burnett said construction crews were scheduled to begin laying block for the new ticket booth on Sept. 7, and should be done with the project in a few weeks.

Burnett said school officials have “alternate plans” to handle ticket sales if the new booth is not complete in time for the Thompson game.

“It’s exciting,” Burnett said. “When they get it done, it will add a lot to the entrance of the stadium.”

FROM STAFF REPORTS CARROLLTON, Ga. – The University of Montevallo volleyball team dropped a road match Sept. 4 against the... read more